Rameses
King of Egypt
Pharaoh of the Exodus

Become a greater Pharaoh of Egypt than his father ever was, even if it meant enslaving or executing the Hebrews (failed)

Rameses is the deuteragonist-turned-main antagonist of DreamWorks's 2nd full-length animated feature film, The Prince of Egypt. He is based on the Pharaoh from the biblical tale of Moses; indeed, the movie, for the most part, follows the story faithfully. However, in The Prince of Egypt, he and Moses were raised as brothers and the conflict between them is seen as a deeply personal one on both sides.

Rameses was but a toddler when an infant Moses was discovered by his mother; during this period in history, his father had ordered the death of all Hebrew boys after a prophecy saying that the slaves would be united under a leader chosen by God (similar to how Herod would, many years later, attempt another Massacre Of The Innocents). The young Rameses was by his mother's side as she took his new baby brother to meet the Pharaoh. The Pharaoh agreed to raise the infant, and Rameses presumably shared a happy childhood with Moses, accepting him as his own brother.

When we next meet them, Rameses and Moses are in their teens and prone to mischief, engaging in wild chariot races. Both brothers were competitive but fairly good-natured towards one another; however, their chariot race caused great damage to their surroundings, infuriating Rameses' father who was harsh with his eldest son, calling him a "weak link," an insult that deeply wounded Rameses and would continue to affect him later in life.

When Moses transformed his staff into a cobra as his first miracle, Rameses was amused and had Hotep and Huy perform a magic act of their own in an attempt to make Moses see otherwise. Following this event, he motioned to Moses to follow him to a secluded area so as to talk alone. Once Rameses was away from the public eye, he conversed more openly with Moses, trying to justify not only his own actions but that of his father. However, he was visibly hurt when Moses rejected his words and, feeling betrayed, became angry; telling Moses that "I do not know this God" and that he would not let the Hebrews be set free, also ranting that he would not become the weak link as his father previously told him. Rameses then informed Moses that all slaves would have their workload doubled, implicitly blaming Moses.

When the two next met, Rameses was enjoying a boat ride on the Nile when Moses once again demanded that he set "his people free." Rameses unsuccessfully tried to ignore Moses and promptly ordered his guards to bring Moses to him. His guards attempted to capture Moses, only for God to turn the Nile River into blood as another of His miracles. At first, Rameses was shocked at this show of power and demanded that Hotep and Huy explain how it was done. When the two magicians replicated the miracle via the use of a dye, Rameses' fear subsided and he laughed it off, then warned Moses that the "joke" must now end, unaware that this was just the beginning.

The two brothers' confrontation reached its climax during the event known as the Ten Plagues of Egypt, in which God unleashed ten plagues upon the kingdom of Egypt. Although the suffering was unbearable, Rameses refused to give into Moses' demands; as a result, the people of Egypt suffered for many days and nights as the plagues manifested as frogs, gnats, flies, death of livestock, fire from the sky, painful boils, locusts, and darkness.

During the onset of the great darkness, Rameses was visited by Moses in the temple. He was embittered and angry, paralleling his father when he expressed a desire to re-create the events of the massacre (stating that his father may have had the right idea about dealing with the Hebrews); this saddened Moses, who told Rameses that he had brought the final plague upon himself. Thus, due to Rameses' hubris, the Tenth Plague was unleashed upon Egypt. The Angel of Death descended from the heavens and killed all of the kingdom's firstborn children, including Rameses' own son, while the first-born children of the Hebrews were spared.

Overwhelmed with grief, Rameses told Moses to go and take his people with him; thus the Hebrews (along with some Egyptians) left Egypt behind and began their great exodus.

However, Rameses had a change of heart and pursued the Hebrews across the desert, cornering them at the Red Sea alongside a small army. He charged at them with the intent of either recapturing them or killing them. However, God intervened by sending a pillar of flame to stop Rameses and his army long enough for Moses to part the Red Sea using his staff. The Hebrews then proceeded to cross the sea.

However, Rameses wouldn't stop and, once God removed the pillar of flame, he resumed his charge, prompting God to close the path made by Moses, drowning many of Rameses' men and sending Rameses himself hurling back onto the shore. He then yelled Moses' name in anger and sorrow, broken by defeat.

While it would be an exaggeration to call him a villain, Rameses was not truly evil per se; just stubborn. His cruelty and stubbornness apparently stems from his past, where his father taught him to hold fast to a strong will and an unwavering mindset; it is worth noting that Rameses's principal objective was getting his father's acceptance. Rameses also did genuinely and deeply care about his son, and was utterly broken by his son's death.

At the start of the movie, Rameses did have a true brotherly bond with Moses, and they considered each other quite close. Before the final plague, Rameses tells Moses that he wishes they could just be a family again. Anyone could also consider him to be a control freak, forcing high standards on one of his guards, and bringing a guard who is ill up onto his feet and giving him his stick even though he is too ill to guard his king.

Moses and Rameses before the final plague 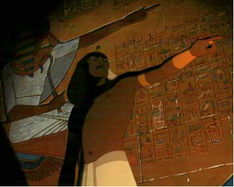 "You, and your people, have my permission, to go. LEAVE ME!" 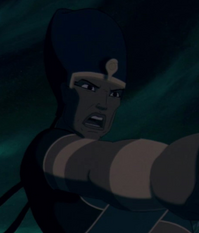 Rameses leading a charge against Moses and the Hebrews

Rameses, stranded on a island, screaming with fury "MOSES!!! MOSES!"
Add a photo to this gallery
Retrieved from "https://villains.fandom.com/wiki/Rameses_(The_Prince_of_Egypt)?oldid=1738652"
Community content is available under CC-BY-SA unless otherwise noted.