Leader of the Wardogs

Ramirez is one of the two secondary antagonists (alongside The Cerberus Leader) in the controversial video game, Manhunt. He is the main leader of the gangs (mostly Wardogs) and Lionel Starkweather's ally.

He was voiced by Chris McKinney, who also voiced Jim Fitzgerald in Grand Theft Auto IV: The Lost and Damned.

Ramirez is a war veteran and soon begun working for Starkweather, starring in his own movie titled, "Let's Play Ramirez Says".

After that he is seen at the church, sending The Innocentz into various groups and sending them off to different locations.

Ramirez has orders to make sure that Cash is killed, and by the end of the scene, only one will be left alive. Ramirez is later killed by Cash, as he attempts to request reinforcements.

After his death, Ramirez is only mentioned later by Starkweather in one of his lines when trying to negotiate with Cash: "You want in? OK. Ramirez was a schmuck anyway. I could do with a man like you on location."

After the player manages to get to the top floor of the apartment block, Ramirez will leave a locked door from the penultimate floor and run away while Wardogs arrive giving cover to him. After the scene of him leaving the door, the player have two minutes to kill Ramirez, but it's almost impossible to kill him before he reach the ground level as he can be only seen sometimes along the path by a couple seconds before running to out of sight.

When Ramirez exits the apartment block, he will run to the platform in front of the exit and stay there until the time ends. If the player fails to kill him before the reinforcement time is up, two more Wardogs using sniper rifles will show up near the exit of the apartment block, and they will stay near Ramirez. 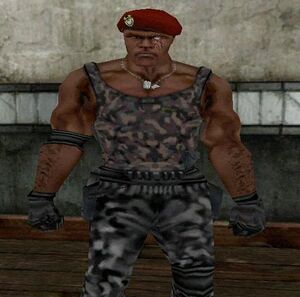