Liar Starscream (only in Animated)

Lying (only in Animated).

Rid Earth and Cybertron of Autobots.

Brute Henchman
Ramjet is a minor antagonist in the Transformers franchise. He was originally one of the second year Decepticon Jets along with Thrust and Dirge. His name derives from the fact he is a jet who rams things.

Like many of the second year characters, Ramjet was introduced in the second season two-parter Dinobot Island, where he appears without introduction as part of Megatron's squad on Earth. One of his most prominent appearances is in "A Decepticon Raider at King Arthur's Court", where he is transported back to medieval times along with Starscream, Rumble and Thrust. In another memorable appearance, after having his systems disrupted, he attempts to crash onto the Autobots only to instead crash onto Megatron. After the twenty year time skip following the second season, Ramjet manages to get quite graphically killed twice, first whilst battling Unicron in The Transformers: The Movie and then by Ultra Magnus inFive Faces of Darkness. Despite this, he reappears later in the third season in Thief in the Night, where he is one of the Decepticons who accompanies Galvatron to Carmbombya. He was voiced by Jack Angel, who was later the second actor to voice Cyclonus, as well as Astrotrain and Breakdown.

In the Marvel series, Ramjet was introduced as one of the Decepticons still under Cybertron serving Straxus. He had a reputation as one of the Decepticons' deadliest killers and was one of the targets of the Autobots' Operation Volcano. However, the operation was called off when Ramjet and most of the others were summoned to Earth to reinforce Megatron's depleted faction. On their first Earth mission, he, Thrust and Dirge provided air cover for Megatron's attempt to steal power from a dam, where they ended up battling the Aerialbots. Ramjet continued to appear occasionally as command of the Earth Decepticons passed first to Shockwave and then to Ratbat. On one occasion, he led a group of Decepticons in hijacked an oil tanker, only to find out it was empty. Like most of the Transformers from the first two years, he stopped appearing after the Underbase Saga, so may have been killed during the Underbase-powered Starscream's rampage.

In Marvel UK's post-movie storyline, he was among the squad of Decepticons working for Soundwave who helped defend Cybertron from a Quintesson attack.

Ramjet was one of the army of clones created by Starscream in the second season two-parter A Bridge Too Close. All of the clones had an exaggerated aspect of Starscream's personality: Ramjet was the Liar Starscream, incapable of telling the truth, even contradicting something he had just said. He and the other clones joined Starscream in attacking Megatron, which quickly turned into a three-way fight with the Autobots. When Starscream was defeated and decapitated, Ramjet and the others clones quickly pledged allegiance to Megatron, although the encounter ended with both Megatron and Starscream falling into a space bridge and being teleported into space.

Ramjet made a few more appearances during the third season. He was captured by Lockdown, who turned him over to Sentinel Prime. Ramjet turned the tables on his captor but was quickly recaptured by Optimus Prime's Autobots. In Ramjet's last appearance, Decepticon Air, he and the other prisoners on the ship were released by Swindle and took control from Sentinel Prime. Optimus again came to the rescue and tricked the Decepticons into trying to use a freezing unit on the Autobots: He had reversed the settings so it froze the Decepticons instead. Ramjet and the others were taken back to Cybertron as prisoners.

He was voiced by Tom Kenny, who also voiced Starscream and most of the other clones. 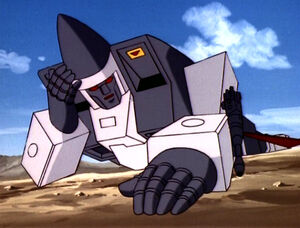 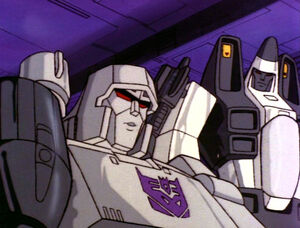 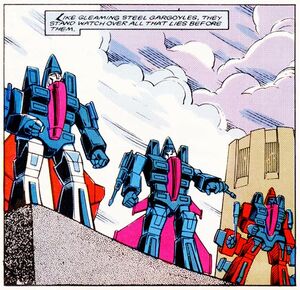 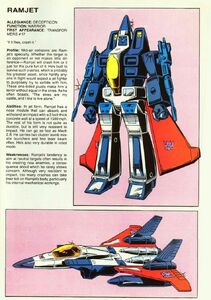 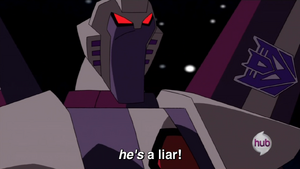 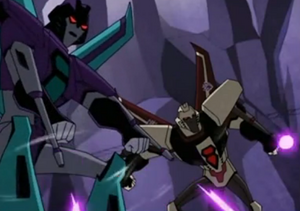 Retrieved from "https://villains.fandom.com/wiki/Ramjet?oldid=4318359"
Community content is available under CC-BY-SA unless otherwise noted.