Ramletheal Valentine was an antagonist in the Guilty Gear franchise. She is a resident of the Backyard.

Ramletheal Valentine is emotionless, with no regard for anything other than her target, with concepts such as morality and judgement being meaningless to her. She cannot place a value on things unrelated to the purpose of her existence. Because she lacks emotions such as desire or intent, she is unable to determine whether something will be beneficial or detrimental, and is even unable to lie, so sometimes Ramletheal will divulge confidential information without realizing it.

Ramletheal Valentine is a non-human life form born in the Backyard, which governs all of creation. Her relation to the Valentine who orchestrated the prior Baptism 13 Incident (the Illyrian Invasion) is unknown. As an assassin of the Merciless Apocalypse, her objective is the extermination of the human race, and to that end she has formed an alliance of convenience with the United Nations Senate. Waking of the "Cradle" is her sole objective and mission.

Ramlethal Valentine is set to appear as one of the fifteen characters to appear in the base roster of Guilty Gear -STRIVE-.

Ramlethal Valentine uses balloon-styled familiars named Lucifero as a weapon, like the previous Valentine. However, unlike the latter, Ramlethal uses two, one black and another white, which can combine with each other. Her cape also suggestively a type of Lucifero, due to its fleshy underneath complete with retractable set of triangular teeth that can shred enemies like buzzsaw. 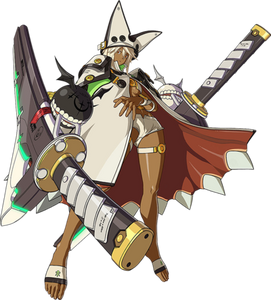 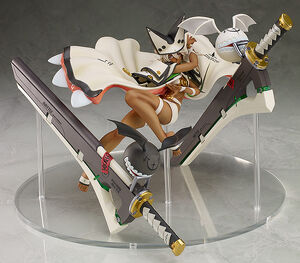