Hanging out with his fellow Constructicons while awaiting orders from high ranking Decepticons such as Soundwave.

Obtain Sam Witwicky and the Matrix of Leadership from him (failed).
Kill Bumblebee (failed).

Rampage is a minor antagonist of the 2009 film Transformers: Revenge of the Fallen. He is a Constructicon who transforms into a yellow Caterpillar D9T builds the left leg of Devastator.

Rampage, alongside with his fellow Constructicons Long Haul, Mixmaster and Scrapmetal aboard a cargo ship. Ravage, who was sent by Soundwave, landed there and called them in to help him dive into the depths of the Laurentian Abyss to revive Megatron. Upon arriving there, Scalpel examined Megatron and then stated they need a small Construction to serve as extra spare parts for them to revive him. Rampage, Long Haul, and Mixmaster then kill Scrapmetal to use him for the spare parts and then Scalpel injects the shard to revive him, which is a success.

During the fight in Egypt, Rampage's yellow painted limb counterpart then combines with the other Constructicons to form Devastator, who then attack Leo Splitz, Seymour Simmons, Mudflap, and Skids. The red Rampage, also known as "Skipjack", was ordered by Starscream to set their trap for Samuel James Witwicky: his parents were being held, hostage. Sam was willing to exchange the remains of the Matrix to save his parents, while Bumblebee strategized to attack him. After a long fight that also killed Ravage, Bumblebee finishes Rampage off by ripping off his arms and over-extending his neck with a powerful kick, killing him. Devastator, in turn, was killed by being hit by the US Navy's experimental railgun, that hit him. 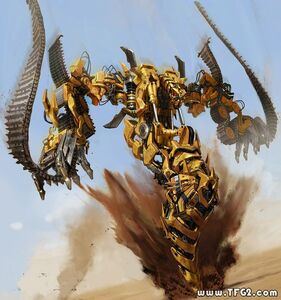 A working design for Rampage.