Bullying Gary for his height and Arthur Fleck for his illness.

Randall, or Randy for short, is the secondary antagonist of the 2019 psychological thriller film Joker, the first installment of the DC Black series.

He was portrayed by Glenn Fleshler who also played Cordell Doemling in Hannibal, Errol Childress in True Detective and Timur in Grand Theft Auto IV: The Ballad of Gay Tony.

The film's script specified that Randall was in his mid-50s by the time of the film's events which took place in 1981 meaning he was not born before 1926. He lived in Gotham City and worked for the entertainment business "Haha" as a clown-for-hire alongside Arthur Fleck and Gary. While Gary actually cared for Arthur's well-being and treated him with more respect than most Randall was only interested in looking out for himself; he would even go out of his way to torment Gary for his dwarfed stature.

After Arthur was robbed of and beaten with a company street sign by a group of teenagers and left to pay for the sign from his wages Randall approached Arthur the next day calling them "savages" and "animals" telling Arthur he needed to defend himself; he offered Arthur a revolver which he reluctantly accepted. While Arthur was performing at a children's hospital the gun fell out of his pants and he was quickly fired finding out during a call with his boss that Randall denied giving the gun to Arthur and offered no help demonstrating his true colors. When Arthur went to retrieve his belongings he told the rest of his coworkers that Randall lied sarcastically mentioning he still owed him to which Randall again denied everything as Arthur stormed out in a laughing fit.

Randall and Gary later showed up at Arthur's apartment before he was set to appear on Murray Franklin's show. Randall initially claimed he was visiting to offer condolences in regards to the passing of Arthur's mother Penny Fleck not knowing he killed her and asked if he was dressing for the Clowns' rally against Thomas Wayne and Gotham's other elite at City Hall. Arthur denied knowing about the rally and Randall soon revealed his true reason for coming was that he told the police about Arthur's false misconduct.

He also said the police asked him and his co-workers about the identity of the clown who murdered three Wayne Enterprises employees before mocking Gary's fear that he could be the suspect. Arthur quickly took out a pair of scissors and stabbed Randall in the eye and throat before pinning him to the ground and slamming his head into the wall repeatedly, killing him to the shock and horror of Gary. Having gotten his revenge Arthur let Gary go free afterwards for acting differently towards him than Randall leaving the fate of his corpse unknown although it was likely discovered following Arthur's arrest. 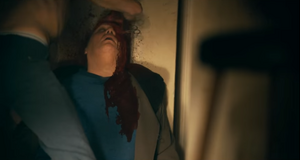 Randall's corpse.
Add a photo to this gallery

Retrieved from "https://villains.fandom.com/wiki/Randall_(Joker)?oldid=3848851"
Community content is available under CC-BY-SA unless otherwise noted.