Steal supplies from Michonne and anyone (succeeded for a while).

Randall is the secondary antagonist of Telltale's The Walking Dead: Michonne. He is the co-leader of Monroe and the right-hand man of Norma who also is his sister.

He was voiced by Derek Phillips, who also voices Treavor Pendleton in Dishonored, Mark Jefferson in Life is Strange, and Arthur Maxson in Fallout 4.

Randall shows to be a cruel, merciless and barbaric man who has no qualm in killing innocents (even children). He shows to be as equally cruel to his own people, mocking Zachary for his homosexuality, as well as his supposed lack of usefulness. As the game progresses, his cruelty only gets worse; teasing Samantha and her younger brother James about their father's death at the hands of himself. Randall also threatens to kill everyone in Michonne's group, including James and Alex. He also provokes Michonne about her two daughters and can even push her into killing him. However, despite his sociopathic tendencies, he's also fiercely protective and loyal to his sister.

Not much is known about Randall's past other than he grew up with his sister Norma. It is indicated that Randall's father had abused him with a belt.

Randall is first seen in the Mobjack, alongside their man, and they stole the supplies from Michonne's group. And took the group as a hostage.

After Michonne and the group's escaping, Randall and his men tried to kill them. But Michonne's group arrived to the Fairbanks house. Later, when John Fairbanks is pullng the zombie, Randall shoots him in the head and attacked the house with his two men. But the two men killed by Michonne's group and when Randall is trying to kill Paige, Michonne beat and defeated him. Michonne can kill Randall, bash him in the head with wrench or spare him and take him as a hostage.

Norma and her men came to house with Michonne's men and Michonne offers Michonne a trade.

If Michonne accepts the trade, she will give a zombie Randall to Norma, after Norma spots him, she shoots him in the head.

If Michonne does not accept the trade, a shootout will start and Samantha will shoot a zombified Randall.

If Michonne accepts the trade, she will give Randall to Norma, but, Randall will attack Michonne and attempt to kill her, but Michonne or Samantha shot him in the head.

If Michonne doesn't accept the trade, a shootout will start and Samantha will shoot Randall. 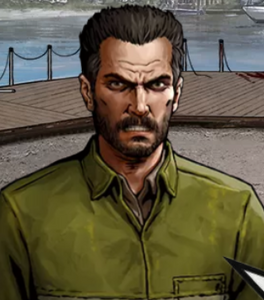 Randall as he appears in The Walking Dead: Road to Survival. 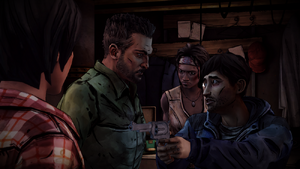 Randall yelling at Zachary and pressuring him to find out where the missing supplies are. 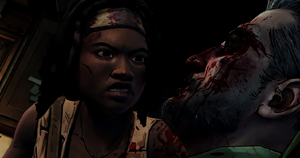 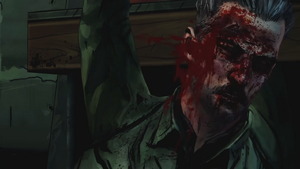 Randall being hit in the head with a wrench by Michonne after he talks about murdering the kids. 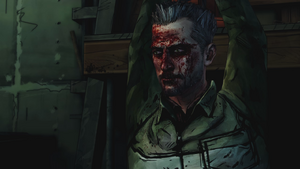 Randall smiling and showing no remorse while the kids are crying about him killing their dad. 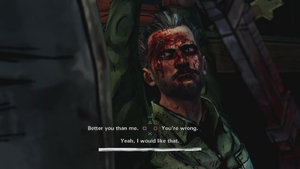 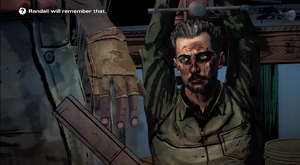 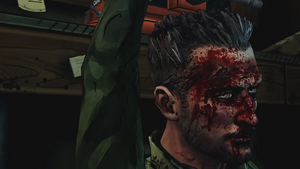 "Guess that means the dance is over" 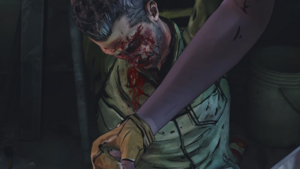 Michonne punching Randall after he says she's the bad one. 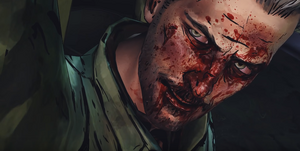 Randall laughing after hearing Norma's threat to hurt Pete's Crew (through the radio). 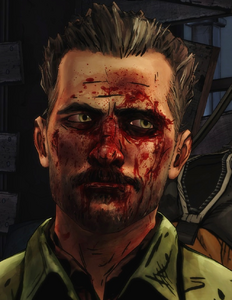 Randall after talking to Michonne while being held hostage at the Fairbanks' house. 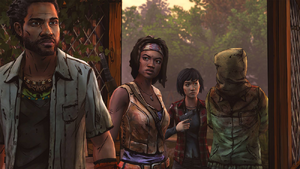 Michonne, Sam and Pete holding Randall hostage and negotiating a trade with Norma for Pete's Crew. 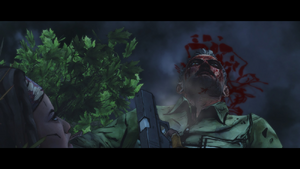 Michonne killing Randall while he's foolishy attacking her after they made the trade.