Taking whatever he wants.

Convince the inhabitants of Appaloosa that he is not responsible for the death of Marshal Jack Bell; escape justice by avoiding Virgil Cole and his deputy Everett Hitch

Randall Bragg is the main antagonist in the 2008 film Appaloosa.

He is portrayed by Jeremy Irons, who also portrays Simon Gruber in Die Hard with a Vengeance, Profion in Dungeons & Dragon, & Scar in Disney's The Lion King.

Bragg is a rancher who frequently terrorises the small western town of Appaloosa, and he is also responsible for the deaths of Marshal Jack Bell and two of his deputies after they came to arrest two of Bragg's men. The townsfolk soon hire a lawman named Virgil Cole and his deputy Everett Hitch to help keep order in the town and protect them from Bragg and his men. After Cole witnesses four of Bragg's men urinating in a saloon, he threatens them but they still attempt to pull on him. In response, Cole kills two of them while Hitch kills the third (the fourth surrenders his firearm and leaves). Hearing this news, Bragg soon confronts Cole in person, with Cole calmly stating that if he and his men do not follow the laws of the town, he and Hitch will take appropriate action. Bragg, being a proud man, mocks Cole before leaving.

Later, one of Bragg's men informs Cole and Hitch that his boss dis kill Jack Bell and that he will testify against him in court. Cole and Hitch successfully capture Bragg off guard and bring him back to Appaloosa where he is put on trial. After being found guilty, despite his unconvincing lies, Bragg is sentenced to hang and taken away on board a train. During the journey, two of Cole's old acquaintances known as the Shelton brothers successfully rescue Bragg by using Cole's newfound love interest, Allie French, as a bargaining chip. Bragg then escapes with the Shelton brothers. Cole and Hitch pursue them and eventually catch up with the group, but they are attacked by a group of Native Americans. The pair eventually manages to bring Bragg to the nearest town, Beauville, but they are unaware that the town's sheriff is related to the Shelton brothers and they manage to free Bragg before engaging Cole and Hitch in a gunfight. They manage to kill the sheriff and the Shelton brothers, but Bragg escapes a second time on horseback.

Returning to Appaloosa, Cole and Hitch hear that Bragg has been granted a full pardon by President Chester A. Arthur, who had apparently known and worked with Bragg in the past. Bragg then returns to the town and attempts to convince Cole and the townsfolk that he is a reformed man, but Cole makes it clear that he's still determined to bring Bragg to justice. After Bragg buys the hotel, Hitch comes to suspect that he is involved in further illegal activities, specifically the robbery of a gold shipment in Mexico. He also witnesses Bragg spending time with Allie and concludes that she is in a secret relationship with him. Despite Bragg's nefarious deeds, neither Cole nor Hitch are able to deal with him within the confines of the law.

Hitch becomes increasingly frustrated that Bragg has managed to avoid punishment, knowing full well that he is guilty of killing Jack Bell. Hitch confronts Bragg in the saloon, punches him and then forces him to participate in a duel, threatening to kill him immediately if he refuses. Bragg reluctantly steps outside and engages in a Mexican standoff with Hitch. As Cole looks on from nearby, Bragg reaches for his pistol but he's too slow, as Hitch instantly shoots him in the chest. Bewildered, Bragg falls to the ground, dead. 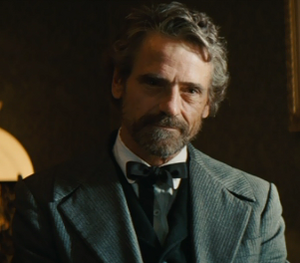 Retrieved from "https://villains.fandom.com/wiki/Randall_Bragg?oldid=3631432"
Community content is available under CC-BY-SA unless otherwise noted.