Randall Culver was a survivor in AMC's The Walking Dead. Randall had been traveling in a group with Dave, Tony, Sean, Nate, and Jane and around 30 other survivors, before being taken hostage by Rick's group. He is the secondary antagonist of the second season. He also appears as a character in the Facebook game, The Walking Dead Social Game.

He was portrayed by Michael Zegan.

Little is known about Randall's life before or as the outbreak began other than that he attended school with Maggie, and that he lived with his mother, whom he lost in the outbreak. He talks about having a normal life as "just some guy".

Randall is first seen by Rick, Hershel, and Glenn standing on a roof across the street from Patton's Bar, trying to shoot them. Nate, in their truck, tells Randall to jump down but when he attempts to jump, he slides down the nearby roof and into an alley where he begins screaming. Thinking he was consumed by walkers, Rick, Glenn, and Hershel run over to their vehicle and find that he had fallen onto a railing-pike, impaling his leg. They negotiate on whether to save him or not. Rick says he is just a kid and Hershel agrees. Unable to get Randall's leg unstuck, Rick uses his strength and rips it out of the spiked-fence. The three then proceed to put him in the car and blindfold him so he doesn't know where the farm is. Hershel states that he performed surgery on his leg.

Rick and Shane bring Randall bound and gagged with them to collect supplies and to leave him behind. However, Rick and Shane are shocked when Randall reveals that he went to school with Maggie and knows who Hershel is and most likely knew where the farm is. Shane attempts to shoot him, but Rick intervenes, causing the pair to fight and leaving Randall lying on the ground tied up. Shane accidentally causes a horde of walkers to be released, which attack the survivors. Randall is able to cut the ropes with a knife and is about to escape when he is stopped by Rick. Randall tells him to leave Shane behind and promises Rick he isn't going to say anything to his group, but Rick just tells him to shut up. Reluctantly they decide to leave Shane behind as he is trapped inside a school bus. However, at the last minute they change their minds and drive past the horde in Shane's car, killing many walkers and rescuing Shane. Even though Randall helps save Shane's life, he is once again bound and gagged and thrown in the back of the car. Rick says they will leave him in the barn overnight upon return to the farm, and that he will most likely be killed.

Randall is brutally interrogated by Daryl, and reveals that he joined a large group of 30 survivors hoping to ensure his survival. He also alludes to this group carrying out violent raids and gang rapes, prompting a repulsed Daryl to beat him even more furiously. The rest of the group decide that releasing Randall would be dangerous and decide to execute him. They leave him in the barn, saying they will kill him at night. Carl finds a way into the barn, and Randall talks to him, asking him to set him free. Carl approaches Randall slowly, not talking, but Shane enters the barn and sees Carl there. Shane takes Carl out of the barn. Despite Dale's attempts to convince the group otherwise, Rick decides to take Randall to the other barn to be shot. However, when he is about to shoot Randall, he sees that Carl is watching. Carl encourages him to shoot Randall, horrifying Rick, who subsequently changes his mind. Daryl takes Randall back to the first barn and ties him up, and then leaves Randall alone in the barn after hearing Dale's screams.

The decision of what to do with Randall is still left on hold for Rick and the group, mostly due to mourning over Dale. Shane is very persistent with Rick to "handle" the problem with Randall, but Rick is still reluctant. Later on, Rick decides to soon handle it, but with news of Carl's confession, Shane urges him to talk to Carl first. Though Rick reminds him that Shane, himself, told him to deal with Randall, he claims to do it "later". While everyone is distracted, Shane sneaks into the barn and makes several attempts to kill Randall or at least frighten him into submission. Shane then decides to take Randall out into the woods and claims he wants to go with his "group". However, it was only a distraction as it's heard off-screen that Shane murders Randall by snapping his neck and then slams his head into the tree to appear as if he was assaulted by Randall. He then goes running back to the farm, claiming Randall attacked him and ran off. Later, it's shown that this was obviously a trap, while the group was distracted to capture Randall. Daryl and Glenn would later run into his reanimated zombie. The two have a fight with him but eventually kill Randall. They examine him and are shocked to discover that he died of a broken neck and there were no bite marks on his body and question why he became a walker without getting bit. When Daryl later questions Rick about this, he reveals that they are all carriers of whatever turns people into zombies, meaning that they will all turn upon death, having learned the truth from Dr. Edwin Jenner at the CDC. 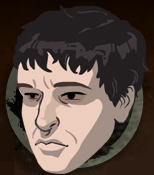 Randall in the social game.