High-ranking place in any hierarchy he is found
Wandering plotter

Take over the world he is found in as either as a God or (at least) as a supreme ruler and throw it into chaos.

The most recurring and without a doubt, the most important villain of the entire Stephen King mythos with countless various acts of atrocities in his name, Randall Flagg is following King's own words, the best villain he created, whom he had in mind since he began writing. Flagg has appeared in multiple works, always as a powerful and charismatic embodiment of evil.

Randall Flagg goes by many aliases including Walter O'Dim, and Marten Broadcloak, but his real name is Walter Padick.

Within the novels, Randall Flagg was given to a mill owner and his wife to learn the ways of man. However, at the age of 13, he grew bored, burned down his house, and sought to find his real father, Maerlyn. He was raped by a stranger the next year. Eventually, Flagg became something of a "quasi-immortal" demon upon having learned the ways of dark magic from his father once he found him.

It is implied that another Stephen King villain, the unholy demon known as He Who Walks Behind the Rows in Children of the Corn, was an avatar for Flagg, who shares similarities with the biblical demon Legion which The Eyes of the Dragon novel calls him as such.

Flagg was first introduced in The Stand, where he represented the concept of evil and stood in opposition to Mother Abagail, who represented good: the two fought for control over the survivors of a world plagued by disease.

The Eyes of the Dragon

He made a second appearance in The Eyes of the Dragon where he plans to put the medieval city of Delain into chaos.

Flagg's main purpose seems to be the bring about the end of civilizations by spreading destruction and sowing conflict. He has many supernatural powers by which to achieve his goals: such as necromancy, prophecy and the ability to look into the predatory nature of man and beast.

He ultimately meets his end when Roland's half-son named Mordred kills Flagg for trying to manipulate him.

He later appears in Heart of Atlantis and Gwendy's Button Box as the main villain of those books as well showing that in the latter book he is still alive.

Randall Flagg appears as the the main antagonist of the 1994 supernatural TV miniseries The Stand based on a Stephen King novel of the same name while his enemy Mother Abagail also appeared. He was portrayed by Jamey Sheridan.

Randall Flagg who also can take form of a raven, was present when the Captain Trips flu, a deadly virus began and swept across the United States and soon the entire Earth in a matter of weeks, eliminating 99.4% of the planet's human populace.

He later chosen and raped his new "bride", Nadine Cross, whom he has been visiting in her nightmares. She soon turned on Randall while having remaining feelings for the man named Larry she met in New York. She committed suicide by taking a jump off the balcony of Flagg's penthouse in Las Vegas, killing not only herself, but also Randall Flagg's unborn child she was pregnant with, not long she replied her final words to the monster, "your seed is cold".

Randall Flagg, who goes by his aliases "Walter O'Dim" and "The Man in Black", appears as the main antagonist of the 2017 supernatural dark fantasy movie The Dark Tower, based on the book series of the same name. He was portrayed by Matthew McConaughey, who also played Vilmer Slaughter in The Texas Chainsaw Massacre: The Next Generation and Joe Cooper in Killer Joe.

Sometime before the events of the film, he killed all of the Gunslinger Roland's men and then during the events of film, he killed his father by telling him to stop breathing. However, Walter's powers did not work on Roland since Roland was born with a special type of power that can deflect demonic powers.

When Walter found out that Jake had a psychic mind, he sought to find the boy to destroy The Dark Tower and rule over the other worlds. In the film, O'Dim kills Jake's stepfather and mother by telling his stepfather to drop dead. He later incinerates Jake's mom Laurie. About 10 minutes into the film, Jake returns back to Earth to find his dead father on the floor and his mom's ashes on the floor and breaks down. Walter is able to abduct Jake by confusing Roland by talking to him. Walter taunts Roland by telling him about his dad and how he could have saved him. Roland is furious and tells Walter to face him.

Jake is able to use his mind to help Roland find him. Roland kills all of Walter's men before confronting Walter himself. Walter and Roland have a brief fight with Walter telling him to come on! Roland starts shooting at Walter, who blocks the bullets with telekinesis. He picks up rocks and throws it at Roland as Roland ducks it and shoots some more bullets at Walter, Walter makes a trick and picks up glass and throws it at Roland, a shard of glass becomes stuck in Roland's hand, and he hides behind a brick wall as Walter taunts him. Walter is able to throw a I-Beam on top of Roland and cover him with rocks, injuring him.

As Walter has a fireball in his hand and is going to kill Roland by burning him. Jake recites the Gunslinger's creed as Roland recovers and gets back to his feet. He shoots at bullet at Walter who is able to block it, however, he shoots another bullet that ricochets off the wall and hits Walter in the chest near the shoulder. Roland reloads his gun and shoots a confused Walter several times in the chest before shooting him in the head, finally killing him and avenging Jake's mother and Roland's father.

We briefly see Walter's body as he had a bullet hole in his head. The machine is finally destroyed along with Walter's corpse and The Dark Tower is finally saved at last.

Randall Flagg appears as the main antagonist of the 2020 tv miniseries The Stand. He is portrayed by Alexander Skarsgård, who also played Perry Wright in Big Little Lies, and Charlie Venner in the 2011 remake of Straw Dogs. 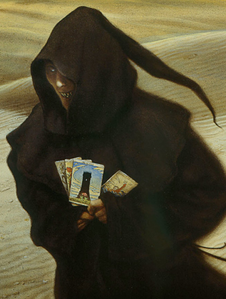 Randall Flagg as the Man in Black in The Dark Tower series. 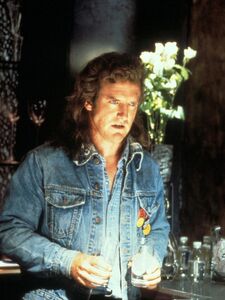 Jamey Sheridan as Randall Flagg in the 1994 miniseries. 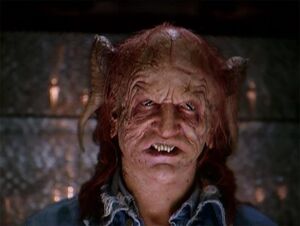 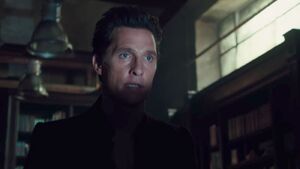 Matthew McConaughey as the Man in Black in the 2017 film, The Dark Tower.

The death of the Man in Black in the 2017 The Dark Tower film. 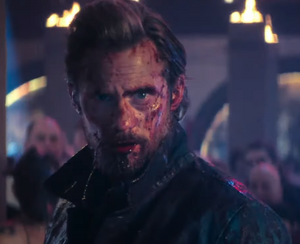 Alexander Skarsgård as Randall Flagg in the 2020 miniseries, The Stand. 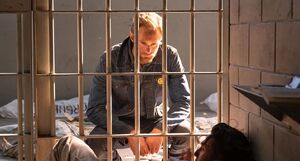 Flagg speaks to Lloyd Henreid in the 2020 miniseries. 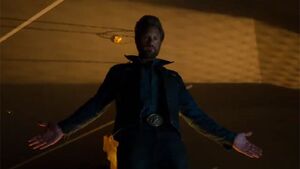 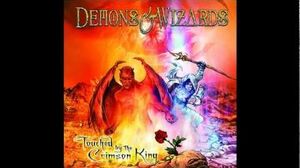 Demons & Wizards - Crimson King
Add a photo to this gallery

Retrieved from "https://villains.fandom.com/wiki/Randall_Flagg?oldid=4124609"
Community content is available under CC-BY-SA unless otherwise noted.