Kill himself (both succeeded).

Randal "Randy" Slade is the posthumous secondary antagonist of the Criminal Minds episode "Painless". A violent, psychopathic teenager, he killed several of his classmates in a school massacre before committing suicide 10 years prior to the episode's events. His actions spurred his surviving victim Robert Adams to commit a series of copycat murders.

He was portrayed by Hudson Thames.

On October 12, 2001, Slade, a 17-year-old student at North Valley High School in Boise, Idaho, came to school armed with a handgun and a homemade bomb constructed by his accomplice, Lewis Ramsey. Slade walked into the school cafeteria and shot and killed two of his classmates, before forcing his friend Jerry Holtz to lock the cafeteria doors, trapping several students inside. He then picked off students one-by-one, daring them to look him the eye before he shot them. He spared school outcast Robert Adams because he actually did as instructed, although he declared him "not worth a bullet". Finally, he set off the bomb with his cell phone, killing himself and ten other students.

In addition to the pain he inflicted upon his victims and their families, Slade's crimes destroyed his own family. His father, Harry, left the state after divorcing his wife (and Randy's mother) Martha, while Martha and her younger son Brandon became pariahs in their community, alternately shunned and harassed by their former friends and neighbors. Slade also indirectly created another monster in Adams, who, 10 years later, re-enacted the murders in an attempt to get the attention and praise he felt he was owed.

When the FBI's Behavioral Analysis Unit (BAU) investigates Adams' copycat murders, agent David Rossi interviews Brandon, who had been seven years old at the time of the massacre. During questioning, Brandon admits that, prior to the massacre, Brandon had found Randy's "kill list". That leads them to Ramsey and Adams.

Slade did not fit the typical profile of a school shooter as a resentful loner lashing out at the popular kids; he was a handsome, well-liked varsity wrestler who had several girlfriends. After interviewing his family, Rossi and fellow agent Aaron Hotchner came to the conclusion that Slade was a narcissistic, high-functioning psychopath who committed the murders simply to inflict as much pain on as many people as he could and exercise ultimate power over his classmates and teachers. His final words, "I am God!", displayed his pathological narcissism and need to dominate others.

He was also a shrewd manipulator of those weaker than him, immediately recognizing Lewis' submissiveness and using it to get what he wanted without ceding any of the spotlight to him. 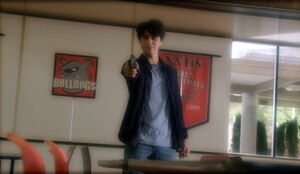 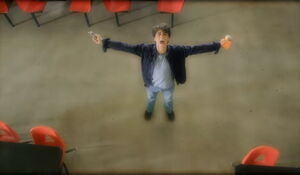