The Fishman
The Specter Of Shadow Canyon

Find Ricky LaRue's lost treasure and claim it for themselves, and also have Velma as his girlfriend (failed).

Ranger Knudsen is one of the two main antagonists (the other is Babyface Boretti) of the 2010 film Scooby-Doo! Camp Scare.

Scooby-Doo and the gang travel to Camp Little Moose, Fred's old summer camp, to vacation and serve as camp counselors. But when they arrive they find the camp empty, save for Burt, the head counselor, and the local Forest Ranger Knudsen. They discover that one of the camp's old legends, the Woodsman, has come to life and scared the kids away. Ranger Knudsen suggests Burt close the camp before leaving. Burt is about to heed the Ranger's advice when three kids, Luke, Trudy, and Deacon, arrive at the camp. Fred convinces Burt to keep the camp open until the Mystery Inc. gang discover what's going on. But the gang and the kids are soon attacked by the Woodsman. The next day, everyone decides to spend the day at Big Moose Lake, home of the rich and modern Big Moose camp. The gang are enjoying their time at the lake until they are attacked by the Fishman, another camp legend come to life. During the chase, Scooby-Doo discovers a building at the bottom of Big Moose Lake. Everyone is now very scared, especially Deacon.

Everyone meets back at Camp Little Moose to go over what they found. Deacon decides he has had enough and wants to go back to Camp Big Moose, and Jessica drives him. The Mystery Inc. Gang want to know more about the underwater town, so they ask a local shop owner about it. He explains that the town is called Moose Creek, and used to be a mining town that was forced to be evacuated to create the dam and Big Moose Lake. But, more importantly, the treasure of a notorious gangster named Ricky LaRue is said to still be buried there. Before his death, the gangster told his cellmate Babyface Boretti that if the sun hits the town on the Summer Solstice, the location of the treasure will be revealed. Babyface Boretti later escaped from prison two months prior to the current events. The gang reasons that the dynamite will be used to destroy the dam and reveal Moose Creek in order for the monsters to find the treasure, as the next day is the Summer Solstice. But doing this will flood Camp Little Moose. The gang returns to the camp to find that the Woodsman has laid waste to it, but Burt, Luke, and Trudy are safe. But the gang realize that if the Woodsman found nobody at Camp Little Moose, he would be free to destroy the dam. The dam then explodes, and everyone narrowly escapes in time.

Everyone then goes to Moose Creek, now exposed, to explore. There they find Jessica, who explains she was following Deacon. They are then attacked by the Woodsman, who chases Fred, Jessica, and Luke. The rest are found by Deacon, who locks them up a in a jail cell and reveals his true identity as Babyface Boretti, as he is looking for the treasure. After a long chase, the Woodsman is caught and revealed to be Ranger Knudsen, who is also the Fishman and the Specter.

The gang also capture Babyface Boretti, who tries to escape with the treasure. Velma explains that Babyface and Ranger Knudsen teamed up to scare away the kids at Camp Little Moose, explode the dam, and take the treasure. Babyface posed as Deacon to try to convince everyone to leave. The two also used the sonar equipment that they stole to search for the town in the lake. After their plan has failed, Ranger Knudsen says to Velma "Wait for me?" as his final words, before Velma refuses to wait for him and takes them away, much to his distraught.

After the criminals were arrested and defeated, Burt and Jessica merge the camps to form Camp Little Big Moose at Moose Creek. However, a post-credits scene reveals that the Specter of the Shadow Canyon was actually real, hinting that Knudsen may not have been behind a disguise in at least one occasion. 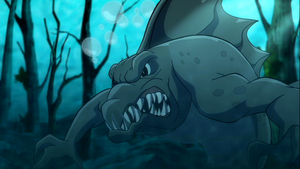 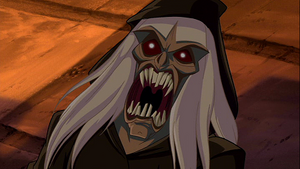 The Specter Of Shadow Canyon
Add a photo to this gallery

Retrieved from "https://villains.fandom.com/wiki/Ranger_Knudsen?oldid=3891460"
Community content is available under CC-BY-SA unless otherwise noted.