Terrorist (both formerly)
Ally and Friend of the Power Rangers (currently)

Destroy the Power Rangers and wipe out all humans (all formerly/abandoned).
Help the rangers destroy the Mut-Orgs (succeeded).

He was portrayed by Vernon Wells, who also played Bennett in Commando, Wez in Mad Max 2, and Mr. Igoe in Innerspace.

Ransik was unintentionally created by the very people he seeks to destroy. In the future, children are born in labs, with traits designated by their parents. Ransik is a product of this tampering, born from an accident in a lab: During one of the required genetic enhancement sessions, one of the vials containing embryonic biomass unexpectedly fell and shattered, spilling the contents into a drain where the staff believed that the biomass would die out due to exposure to the outside world.

However, instead of dissolving, the sewer environment around the said spilled biomass unexpectedly caused it to mutate, and from the amalgamation of toxic waste and mutated biomass, a full-grown adult man was born. Possibly due to inherited memories of his parents' DNA donor, the creature, whom named himself Ransik, developed intelligence equivalent with that of full-grown man, but was forced to raise himself in the underground, rejected from society. As the first mutant, he organized factions of other mutants to take the world away from those who fear and hate his kind. He was also presumably married to a female mutant where from their union, his daughter Nadira was born. Who Ransik's wife and Nadira's mother was is never revealed in the series.

While roaming the dark parts of the city, he found three statues which were actually imprisoned Orgs. Since they had the same goal as him, to destroy humanity, Ransik set them free. The Org spirits copied his DNA and created bodies for themselves, making them Mut-Orgs. In exchange for freeing them, the Mutorgs gave Ransik the power to pull weapons from his body.

At one point before he organized factions of evil mutants, Ransik was bitten by the poisonous mutant known as Venomark. Alone and dying, Ransik was taken in by Dr. Ferricks, who developed a serum which Ransik would need to take for life. Ransik turned on Dr. Ferricks, stealing the serum and his Cyclobot technology, and laying waste to the lab. Dr. Ferricks actually survived the explosion, and became Frax. It should be noted that it's not just Ferricks who felt pity on the mutant, as Jen stated many people tried to help him in spite of the mere sight of his hideous look which would terrify anyone who saw him, but Ransik was too consumed by hatred that reaching him was extremely difficult causing him to deny any help from humans.

Prior to what would be Ransik's last fight against the Power Rangers, Nadira, while looking for Frax with the Cyclobots, spotted a boutique and decided to do a little "shopping" and took the staff and customers as hostages. Trip, the Green Ranger, arrived unmorphed and fought Nadira, but an expectant mother had gone into labor, forcing him to help her. Although Nadira wasn't finished fighting, Trip had her help the pregnant woman. When the woman's baby, a little girl was born, the experience got Nadira to see humans weren't as bad as she thought. After speaking with Frax before Ransik had him reprogrammed, she tried to get her father to stop his crusade against humanity, but he refused, even after Frax's death.

In Ransik's last fight against the Rangers, he overpowered them and caused them to involuntary demorph. While chasing Jen into a warehouse, he injured Nadira, mistaking her for Jen. Upon discovering this, Ransik was horrified at what he had done. Nadira, using another baby she rescued, a little boy, as an example, got Ransik to see humans weren't as bad as he thought, and that Mutants can love too. Ransik, realizing that Nadira was right and how close he had come to losing her, knew his hatred of humans had to end, because it only causes more suffering. He then handed the baby to Katie, the Yellow Ranger and turned himself over to Time Force.

A year after incarceration, Ransik was called on by Time Force to aid them against a new threat, being the Mut-Orgs due to the history between himself and them. He agreed to help the Rangers, and traveled to the year 2002, where the Mut-Orgs went to ally themselves with Master Org. Cole Evans, the red Wild Force Ranger told Jen that Ransik was telling the truth in wanting to help, as his words came from his heart, which Cole had sensed. Before they started to hunt the Mut-Orgs, Ransik tells the Rangers (excluding Wild Force Lunar Wolf who wasn't present), Princess Shayla, Circuit and Nadira, his story about how he unleashed them in the future, and revealed that the Mut-Orgs bestowed him powers to turn any part of his body into a weapon. He also reveals that he's already seen the error of his ways, especially the Mut-Orgs' existence.

The next morning, the Mut-Orgs and Master Org go to a power plant with the intention of increasing pollution. Ransik concludes that they joined forces to try to rewrite history. The Rangers, Ransik and Nadira go to the plant and split into groups.

Wes, Cole, Ransik, and Nadira went off by themselves to find the Mut-Orgs, who attack them in another part of the plant. Just as the Mut-Orgs powered up their Spirit Bomb attack, Ransik, who was determined to fix his mistake, threw himself on them, causing an explosion which destroyed their mutant halves, allowing the Rangers to defeat them. The explosion nearly killed Ransik, but it also destroyed his mutant half, making him wholly human.

As result of mistreatments and being shunned by society due to his hideous nature, Ransik developed into a homicidal, sadistic, wrathful, and destructive force to be reckoned with. He was also self-centered, egocentric, and only focused on his plans for world domination, treating everyone around him except for Nadria like an expendable pawn. He can also be described as ruthless and cunning and has a hatred towards both humans and robots. Whereas he viewed robots as wasted metal that he can abuse, his hatred on normal humans is worse: due to his hideous appearance, the mere sight on his deformed face instantly scared anyone who saw him, which also resulted in society shunning him and he had to endure their mistreatments. He later met other mutants who were also born in the same way like him, and were less fortunate due to having inhuman appearances.

Despite being ruthless, Ransik shows a loving side towards his daughter Nadira and that his desire to rule the world was second only to his fatherly instincts. When he found out Nadria developed a crush on Lucas, despite being upset about the news at first due to him and Lucas being enemies (as Lucas happened to be the Blue Ranger), he ultimately tolerated her decision to date him, even visiting Lucas and giving him dating advice, albeit in a twisted and somewhat violent manner. He did however, give Lucas gifts to give to Nadira to help him impress her. In exchange for this, he threatened Lucas saying if he didn't treat Nadira well, he would end him. He also spied on them during the date and reminded Lucas to give her the presents he gave him and later feigned ignorance when Nadira told him about the date so the credit of giving Nadira a wonderful time would go entirely to Lucas. He also even went as far as to forbid his minions from harming Lucas during the brief period they dated. Despite being Ransik's enemy at the time and not fearing Ransik himself, Lucas respected Ransik's instincts as a father and despite wanting to break up with Nadria he was afraid to out of fear of facing Ransik for doing so.

Ransik's fatherly instincts served as his first step for redemption after nearly killing Nadira with his own hands, having finally seen the error of his ways, he sought redemption just like his daughter did shortly before him. After his change of heart, he referred to the Rangers as his friends and nearly sacrificed himself to stop the Mut-Orgs. Afterwards, he was shown to still dislike Nadira's intentions towards Lucas but seemed more accepting of them. Ransik was notable for being one of the more serious Power Rangers villains. Whereas most villains in Power Rangers are melodramatic, burlesque characters, Ransik, like Astronema was much more of a cold, calculating mastermind with a penchant for convoluted Machiavellian evil schemes, often going for more realistic crimes such as bribery and stealing large amounts of money.

Ransik's powers include telekinesis, teleportation, energy projection, and the ability to pull weapons from his own body. 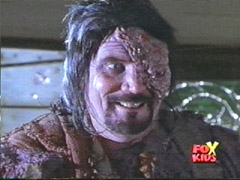 "You're as foolish as your robots!" 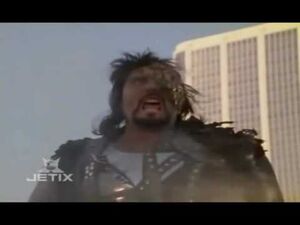 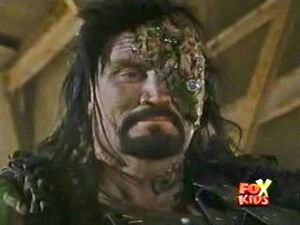