Kill his grandfather Harlan Thrombey for cutting him and the family out of his will.

Kill Fran for blackmailing him (both succeeded).
Evade suspicion from Detective Benoit Blanc and the police.
Trick Marta Cabrera into giving back the family will for himself and have her and Benoit Blanc take the blame
Kill Marta Cabrera for tricking him into admitting his crimes to the police (all failed).

He is the son of Richard Drysdale and Linda Thrombey, and the grandson of the late Harlan Thrombey, whom Ransom had conspired to murder out of anger for cutting him out of his inheritance. He is described as a spoiled trust fund playboy.

He was portrayed by Chris Evans, who also played Lucas Lee in the 2010 film adaptation of Scott Pilgrim vs. the World and Robert Pronge in The Iceman.

Ransom is the son of Richard Drysdale and Linda Thrombey. He is the grandson of Harlan Thrombey, a renowned murder mystery novelist and writer. He is an eccentric but spoiled brat, whose livelihood as a playboy is predicated on his family's wealth. This makes him arrogant and unpleasant in nature, but unlike the rest of the family, he does not hide this part and has no patience for that. However, while his family is indeed unpleasant and full of hypocritical jerks, Ransom is the only one who is truly evil because he is willing to do anything to have his part of the inheritance, including murder. He is overall a selfish, heartless, psychopathic and somewhat immature person, in addition to all his family's flaws. He behaves like a spoiled teenager, even though he is in his thirties. He claims to be seeking his "birthright," but does not care about the rest of his family as long as he gets his own share. He is fully aware of his disgusting nature and he takes pride in the hate his family has on him. That said, he can be charming, charismatic and polite when he wants to be, in order to have what he wants. This is seen when he succeeds in earning Marta's confidence to help him get to the bottom of the case. He is also lazy, as he refuses to work and has no intentions in doing so. But he is intelligent, as seen with his plan to frame Marta for the murder of Harlan. However, his plan has several failures. For example, he himself hired the detective Blanc, thinking he would not find the truth behind the affair and he underestimated Marta's good nature, thinking she would not try to save the life of Fran. He also displays remarkable stupidity in some areas, thinking that "stupid" is spelled with an "o" instead of a "u".The psychopathic part of his personality comes when he is cornered by his self-confession of Fran's murder, by trying to murder Marta with a knife, simply out of spite and refusal to accept his failure.

Despite this, he brought out a valid point, by correcting his mother when she said she is a self-made person, by pointing she started from the million his grandfather gave to her. When it becomes clear that he has grabbed an accessory knife instead of a real one, however, he utters a discouraged "shit" and does not resist arrest any further, walking calmly and quietly into the police car, even if his father tries (badly) to corrupt his path to freedom. As he gets ready to get into the car, he also looks up at Marta with nothing but calm and an ambiguously respectful nod.

On the night of Harlan's eighty-fifth birthday, during a party at his estate, Ransom had learned from Harlan that his inheritance, documented in his will, would go down to his young nurse Marta Cabrera, and that Harlan had intended to cut out Ransom and the rest of the family from the will. Ransom conspired to kill Harlan for doing this, intending to frame Marta by tampering with Harlan's medication in his study.

However, since Marta is a qualified nurse, she still injected the right product without reading the labels, simply because of her natural instinct.

After Harlan ended up killing himself to protect Marta, fearing she would be framed for his death, Ransom skipped Harlan's funeral to cover his tracks by switching back the medication, unaware he was watched by Fran, the estate's caretaker. Fran blackmailed Ransom after deducing he killed Harlan.

After the funeral, in an attempt to further cover his tracks, Ransom anonymously arranged for the private investigator Detective Benoit Blanc to investigate the family, while Ransom drugged and ultimately killed Fran with a morphine overdose. When the revelation that all of Harlan's inheritance has gone to Marta is revealed, Ransom goes on the run with her, urging her to confess to him what had transpired from her account the night of Harlan's death. To further implicate Marta in Harlan's death, Ransom redirected a part of Harlan's toxicology report and the blackmail letter intended for him from Fran to Marta, justifying the slayer rule; if Marta would be found guilty of Harlan's death, the rest of the family would regain the inheritance.

Later, Ransom would burn down the examiner's office with a molotov cocktail, ensuring that the remaining parts of the toxicology report would be destroyed. After Marta finds Fran's corpse when Ransom sends her an address via e-mail to her body, Ransom is taken into questioning, when Detective Blanc finds a part of the toxicology report on Fran's body (which reveals that Harlan wasn't poisoned at all with the incorrect medication), and deduces correctly that Ransom was the killer, and had intended to frame Marta for both Harlan and Fran's death.

When Ransom learns from Marta that Fran was still alive in the hospital, Ransom admits to his crimes under peer pressure. However, Marta vomits on Ransom, due to her inability to lie without vomiting, as Fran had really died at the hospital, swearing retribution against Marta after she had manipulated him into confessing to murder and arson, Ransom furiously attacks Marta with a retractable knife, only to learn it is a stage knife. With his crimes exposed, Ransom is placed in police custody and taken to jail while his family is forced out from the Thrombey Manor, which is now fully owned by Marta. 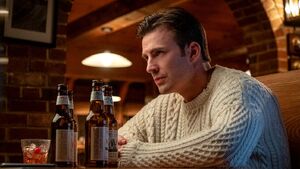 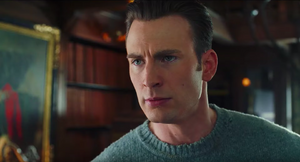 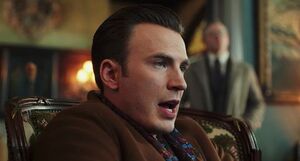 Ransom arguing with his family 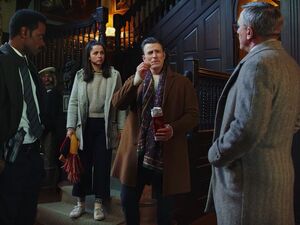 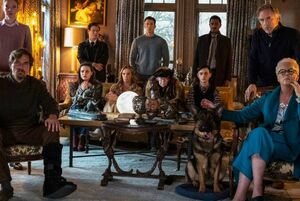 Ransom pictured with his extended family. 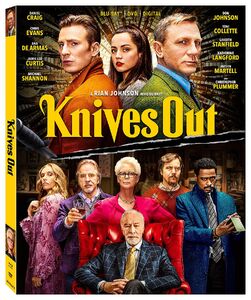 The Blu-ray slipcover revealing Ransom as the murderer. 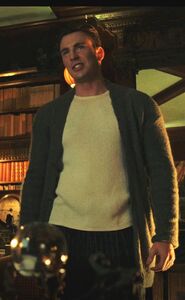 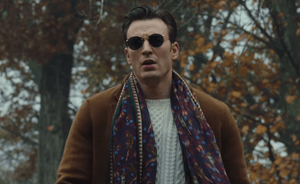 Ransom walking up to the house to attend the will reading.