Villains Wiki
Register
Don't have an account?
Sign In
Advertisement
in: Mature, Date A Live Villains, Anime Villains,
and 19 more

Have sex with Kurumi.

The Rapists are minor antagonists from the Date A Live light novel and anime series. They appear only in the episode 7 of the season 1.

Kurumi returned happy from Municipal School realizing when she met Shido, that he was the one which Phantom had told Kurumi about and he could suppress the powers of spirits. Knowing that he had the power Kurumi needed to go back in the past and kill the first spirit and prevent the first spacequake on the planet earth. While she was returning from school, she accidentally bumped one of the men from a small group of delinquents or vandals.

Immediately after she accidentally bumped the man and apologized to him, they surrounded her and tried to force her to do what they want while claiming she needed to do more then just apologize. Kurumi instantly knew what they were thinking and asked if they wanted to have sex with her. After the three agree they comment on how eager she was as they follow her to a small alley. They were then brutally devoured by Kurumi. 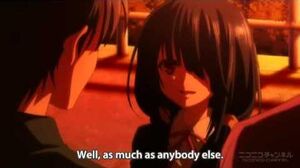 Date A Live - The Offenders Scene