Traitorous Species
The Raptorians are creatures with doglike heads and birdlike bodies that are also the main antagonists of the My Little Pony 'n Friends episode "The Glass Princess".

They are showing an unusual interest in a washing line, using a magic mirror to show it to their mistress, a magic pig named Porcina. The Raptorians work for her with the promise that they'll soon receive their own kingdom. They capture Gusty, Lickety-Split, and Heart Throb in hopes to make a new cloak from their hair. The Raptorians leave the Ponies almost bald, but their hair instantly grows back to its original length. Delighted, the Raptorians set the Ponies to work weaving their own hair into a new cloak for Porcina. After Porcina turns Ponyland into a glass, the Raptorians are delighted that they won't have to put up with her any longer. They later caught Megan and the ponies trying to switch cloaks. Porcina starts the spell to turn the Ponies into a glass, but confronting them face to face makes her realize she has no right. The chief Raptorian snatches her cloak and tries the spell himself, but finds he's holding the fake. A tug-of-war ensues over the real cloak, and it tears in half, releasing a bolt of energy that hits the Raptorians and turns them all into a glass.

They are to remain glass statues forever, as after Pony Land is restored, the cloak is destroyed.

The Raptorians are shown to be power-hungry, intending to take Pony Land for themselves, and also quite violent, as during the final battle they intended to turn the ponies into glass and then shatter them to pieces. They are described as feeling nothing for anything or anyone. Ultimately they take the position of final antagonist of The Glass Princess after Porcina's redemption. 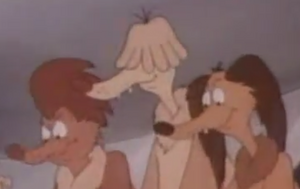