The Rare Hunter or Seeker (4Kids dub) is one of Marik Ishtar's Ghouls in Season 2 of Yu-Gi-Oh!, Battle City.

He was voiced by David Wills.

The Rare Hunter is the least formidable of Marik's Ghouls, but has three sets of Exodia cards in his deck. However, it is later revealed these cards are fake (marked in the 4Kids dub). The Rare Hunter jumped Katsuya Jonouchi on his way to see his sister Shizuka, and dueled him. He won using Exodia, and took his Red-Eyes Black Dragon.

Yugi Muto dueled him at the start of Seto Kaiba's tournament, Battle City, but he forbade Jonouchi to tell Yugi that he had Exodia in his deck, threatening to tear his Red-Eyes to pieces if he did. However, Yugi figured it out anyway, and became the first person to defeat Exodia in any way, and won the duel. As punishment for his failure, Marik took over his body and knocked him unconscious (banished his soul to the Shadow Realm in the 4Kids dub).

He later appeared as a lost soul in Season 4, Waking the Dragons, as Dark Yugi was trying to get to Yugi in a circle of lost souls. However, it is likely that he was just an illusion, as many of the others were neither dead nor in Hell or taken by the Orichalcos.

The Rare Hunter also appears as one of Scott Irvine's followers in Yu-Gi-Oh! The Falsebound Kingdom and named as Rare Hunter. He appears in both Yugi and Kaiba's campaign in the level after Emperor Haysheen is defeated and Scott reveals himself. In Yugi's campaign, he is the boss in the level "Refugees" in the Uruvie Canyon. He tries to capture Téa Gardner and sends several soldiers to capture her. If she can get to Yugi's fort in time, the Rare Hunter will give up and leave and the level's completed. If she does not go in the fort, then she must fight til she reaches him.

In Kaiba's campaign, he appears with the same amount of soldiers with the same monsters in the Maryah-Denn region. After a certain amount of time, Yugi appears and half of the Rare Hunter's army is deleted, giving Kaiba the chance to fight him in the same manner. He does not use Exodia like in the anime but the monsters Dungeon Worm, Monster Tamer and Cybersaurus. There's vague, but visible implications Scott deleted the Rare Hunter for his failure in Kaiba's campaign. 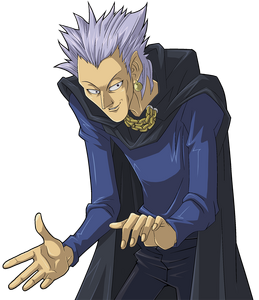