Find Haohmaru and eat his heart to be complete (failed).

Rasetsumaru (in Japanese: 羅刹丸) is a minor antagonist from Samurai Shodown V and Samurai Shodown VI. He was made up to be an evil counterpart to the protagonist Haohmaru, though the two are not related.

Rasetsumaru's appearance mimics Haohmaru's, a given considering that he is more or less a palette-swap of the latter, with the main differences being his light bluish-white skin and red eyes.

Rasetsumaru is a sadistic and bloodthirsty demon who only cares about killing people. He not only loves inflicting pain on others but also loves feeling pain himself.

When Rasetsumaru made his debut in SSV he was poorly received by gamers as a mere copy of Haohmaru.

Rasetsumaru is a demon with unlimited lust for blood who escaped from Makai after Shiro Tokisada Amakusa tore open an interstice between human world and Makai. After his escape he started a killing spree, with his evil sword Torikabuto (meaning 'Butchering Beetle') becoming red from bloods of his victims as he never cleans or polishes his sword. He eventually heard about Haohmaru, a warrior who supposedly looked exactly like him, so Rasetsumaru decided to go after in order to him to kill him and eat his heart to become a whole being. But his trail of destruction, and the fact he resembles Haohmaru, starts giving Haohmaru strings of bad alias.

On his ending he eventually finds Haohmaru and attacks him, but it turned out to be a bhiksuni (also called bhikkhunī; Buddhist term equivalent to a nun in Catholicism) in disguise, who proceeded to defeat and decapitate him. Though he is implied to be dead, the last scene shows his disembodied head laughing, adding his executioner into his hit list by saying another human he wants to kill has appeared.

While it is unknown who defeated Rasetsumaru, it is later revealed to be Yumeji Kurokouchi.

From here, Rasetsumaru gains his own fighting moves and officially became a character of his own and independent from Haohmaru. Here it is revealed that Amakusa is the one who created Rasetsumaru, and while still slaughtering gobs of people along with pursuing Haohmaru the demon makes rivalry with Yumeji Kurokouchi, the bhiksuni who defeated Rasetsumaru in previous game SS V. Having his severed head reattached, Rasetsumaru vexes her upon encounter, daring her to cut him elsewhere in his body.

In his ending, he does succeed in butchering Haohmaru and eats his heart. After that Rasetsumaru becomes a whole entity and extremely powerful demon fighter, roam around indiscriminately/wantonly slaughtering every fighters he encounters. Thanks to his terrible killing spree Rasetsumaru has become a legend and is forever immortalized as a dreadful demon. 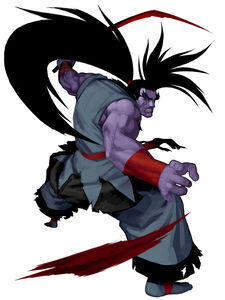 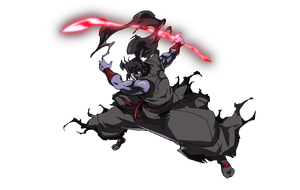 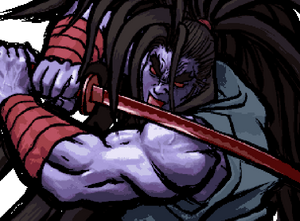 Retrieved from "https://villains.fandom.com/wiki/Rasetsumaru?oldid=3579875"
Community content is available under CC-BY-SA unless otherwise noted.