Rashaverak (previously known as Anderoug and Andreal) are recurring monsters in the Dragon Quest franchise, best known for fighting in groups. They are bipedal purple dragons with wings, crests and yellow bellies and blue tongues. Their specialty are breath attacks and summoning more of their kind.

Though a common enemy in recent games, they originated as one of Psaro's most powerful henchmen and a guardian of one of its barrier towers in Dragon Quest IV. The Rashaverak immediately called two of its same species before conronting the hero/heroine and his/her party. If one of them is defeated, one of its comrades will summon more if left alive. It's recommended that they are all taken down as quick and as simultaneously as possible. They also reappear in Dragon Quest VII, appearing after Orgodemir's revival and in Dragon Quest IX as a high tier inferno grotto enemy, being one of the strongest enemies in the game and the second dragon-type enemy in the game being outranked by the Drakulords. 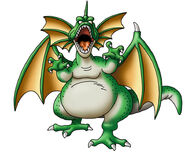 Jade dragon, a similar enemy
Add a photo to this gallery
Retrieved from "https://villains.fandom.com/wiki/Rashaverak?oldid=3553912"
Community content is available under CC-BY-SA unless otherwise noted.