Keep Norbit under her control.

Get rich.
Prevent Norbit from being with Kate.
Make Norbit's life miserable.
Kill Norbit (all failed).

Rasputia Latimore is the main antagonist of the 2007 romantic comedy film Norbit. She is Norbit's abusive ex-wife and archenemy who had forced him to marry her and suffer her wrath for many years.

She was portrayed by Eddie Murphy (who also portrayed Mr. Robinson in Saturday Night Live, Maximillian in Vampire in Brooklyn, and Rex Crater in The Adventures of Pluto Nash) as an adult, Yves Lola St. Vil as a teenager and Lindsey Sims-Lewis as a kid.

As a child, Rasputia meets Norbit Albert Rice. After she beat up a pair of twin bullies who were abusing Norbit, Rasputia forced Norbit to be her boyfriend up until high school graduation, where she forced him into marriage. When Rasputia married Norbit, they moved into a house where the two had sexual intercourse often, with Rasputia always crushing Norbit and breaking the bed. Eventually, Rasputia cheated on Norbit; she even committed adultery again with her personal trainer Buster Perkin. Rasputia never loved Norbit and was always being cruel and abusive to him.

But when Norbit got to see his old childhood sweetheart Kate after she came to her old home town and the very orphanage they both grew up in, Rasputia got all angry and insanely jealous of her. Her three brothers then consulted with Deion Hughes, Kate's successful, yet unscrupulous, fiance who, like Rasputia, is a liar, a cheat, and an unfaithful lover. They requested his help to get Kate to unknowingly sign a contract with a liquor license that gives the Latimores ownership and control and turning the orphanage into their strip club. Rasputia just went along with her brothers' plan and threatens Norbit by never wanting him to see, talk to, or even think about Kate again or else she'll pour acid on her (she showed Norbit a demonstration of it by getting a potato art of Kate and pouring the acid on it which completely destroyed it and saying to it, "How YOU doin'!").

Kate came to visit Norbit, but he saw Rasputia watching and said that he didn't love Kate to save her from Rasputia's wrath. Kate thought Norbit was telling the truth and left, hurt and angry. This pleased Rasputia, but Norbit was so heartbroken he decided to leave during the night. Mr. Wong, the owner of the orphanage he used to stay at, told him he was a man on the inside. Unfortunately, Rasputia and her brothers found Norbit and they told him of their plan to turn the orphanage into a strip club and Rasputia locks Norbit in the basement and instructs Blue to keep guard. Rasputia and her two other brothers drove to the wedding to watch Deion marry Kate so the plan would succeed. However, Blue called to tell them Norbit had escaped. Furious, Rasputia and her brothers went searching for Norbit and saw him riding a bike to the wedding. When Norbit stands up to Rasputia and tells her that Kate taught him to ride a bike, she puts him in a headlock, but another car comes and nearly hits the car so Rasputia is forced to let go.

Norbit makes it to the wedding and tells Kate that he loves her, much to Rasputia's fury. Norbit is unable to convince Kate that Deion marries women for their money, and Rasputia gloats that she has won. But Norbit reveals he had a plan B, and calls Deion's previous wives, revealing Deion is a fake and he runs away. Furious at having lost, all the Latimores attack Norbit and are about to deliver a beat down when the entire town arrives to help Norbit. Rasputia's brothers are afraid, but Rasputia grabs a spade and fights her way to Norbit. She raises the spade to kill him, only for Wong to call her a whale, grab a spear and throw it directly at her anus, painfully piercing it. She yells out in excruciating pain and runs away with surprising speed. Now with Rasputia gone, the town chase her brothers out of town.

It is revealed that the Latimores went to Mexico and opened a strip club there, meaning that they got their happy ending as well. Furthermore, as Mexican men love women regardless they are fat or not, Rasputia becomes the club's most famous and lucrative stripper. Given this, it can be presumed that Rasputia and her brothers never saw Norbit again. 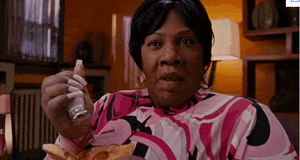 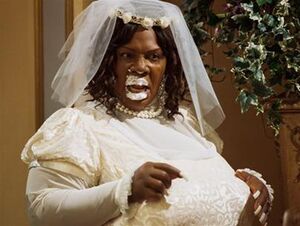 Rasputia when she and Norbit marry each other. 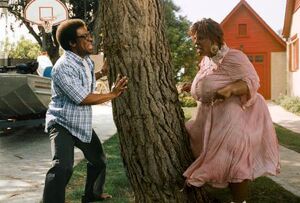 Rasputia chasing Norbit in a rage.
Add a photo to this gallery

Retrieved from "https://villains.fandom.com/wiki/Rasputia_Latimore?oldid=4025910"
Community content is available under CC-BY-SA unless otherwise noted.