Kill the last of the Romanov family (including Anastasia) and complete his curse.

He was voiced by legendary actor Christopher Lloyd and his singing voice was done by popular voice-actor Jim Cummings.

He is based loosely on the real-life psychic Rasputin: however in the film he is depicted as a far more malevolent being of black magic than the real-life Rasputin, though the two share the common title of "Mad Monk". Rasputin was banished for treason by the czar, Nicholas Romanov.

Eager for revenge, Rasputin plans on destroying the Russian royalty. He sold his soul to the otherworldy forces of darkness in exchange for his amulet and for the power to destroy the czar and his family, in the process becoming a lich (a type of undead creature with magical powers). He then returns to the Russian palace and inflicts on the czar's family with the Romanov curse. All of the royals are killed by Rasputin and the Russian soldiers, except for the czar's mother, Mary Romanov, and his daughter, Anastasia. Rasputin eventually attempts to murder Anastasia while chasing her across a frozen river, but drowns after falling through the ice, losing his amulet in the process and he is unable to die until he completes his curse.

10 years later, Rasputin is trapped in limbo, then his amulet is back in his hands thanks to Bartok. Driven more by his desire for revenge, he wishes to finish off what he started before he rests in peace by killing Anastasia. Putting his demonic minions to work on finding and destroying her but failing, he is accompanied throughout the film by his reluctant minion Bartok - who is an albino bat who constantly tries to sway Rasputin away from his obsession but is largely ignored until Bartok eventually gives up.

After two assassination attempts, Rasputin grows tired of his magic constantly failing so he and Bartok return from limbo back to Paris to confront and kill Anastasia there in person. Bartok betrays Rasputin and becomes an entertainer in the cities of Moscow. Meanwhile, Rasputin confronts Anastasia on Pont Alexandre III and in the resulting final battle, he loses hold of his amulet and Anastasia shatters it underfoot, which in turn destroys the magic keeping Rasputin alive. As Rasputin dies, his body is reduced to dust while his soul is dragged away to Hell. 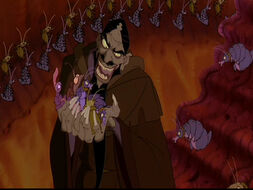 Rasputin sees his reliquary for the first time since his undeath 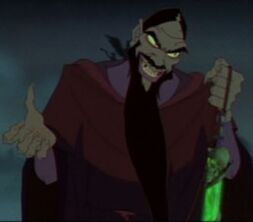 Retrieved from "https://villains.fandom.com/wiki/Rasputin_(Don_Bluth)?oldid=998096"
Community content is available under CC-BY-SA unless otherwise noted.