Lord President of the High Council of Gallifrey

Win the Time War against the Daleks.

Rebuild the Time Lords civilization.
Bring forth the End of Time and destroy all of creation whilst he and the Time Lords alone survive as beings of pure consciousness.
Extract the knowledge of the Hybrid from the Doctor.
Kill the Doctor and the Master.

He is the founder of Time Lord civilization and perhaps the single greatest figure of Gallifreyan history. He was generally considered the first Time Lord, though some believed that distinction belonged to his compatriot Omega.

During the Dark Times of Gallifrey, Rassilon worked with Omega. Using a remote stellar manipulator known as the Hand of Omega, a star was made to go supernova. This power source enabled mastery of time travel.

However, Omega was lost in the explosion and sucked into the resulting black hole, though he survived. The further history of Rassilon is ambivalent and dubious. In the official account, he was an authoritative and benevolent ruler, but there were stories he was a cruel and oppressive tyrant who was imprisoned by the Time Lords in the Dark Tower. The Five Doctors shows that Rassilon is apparently still alive in the Tower. When Time Lord President Borusa takes the ring of Rassilon to gain immortality, he is given it by becoming a statue.

Rassilon fought a war against the Great Vampires, and the Record of Rassilon told Time Lords to destroy any remaining Vampires. However, according to one account the Vampires were nonviolent, peaceful, and quiet, only feeding on mindless animals they bred themselves until the war forced them to feed on sentient species. Rassilon was able to develop regeneration from the DNA of the Vampires but intended it only for the Gallifreyan elite.

Rassilon discovered that within 10,000 millennia a race would evolve called the Divergence that would eclipse the Time Lords. He imprisoned them in the Divergent Universe, which he held in the dungeons of his Foundry.

As revealed in the audio dramas Neverland and Zagreus, Rassilon created the Oubliette of Eternity, a device which removed people from the Web of Time. In the process he created Anti-Time. The people erased became Neverpeople, who inhabited the Antiverse, a Universe of Anti-Time. Rassilon acted as an adviser for the Eighth Doctor and Romana during the Anti-Time crisis, when the Neverpeople began to retaliate against the universe. Rassilon presented himself as a wise and benevolent figure to the two of them.

In reality, Rassilon was manipulating events to ensure his return to power, and the destruction of the Divergence. He ensured the Doctor was infected by Anti-Time, becoming the monstrous Zagreus, and thus a worthy weapon against Gallifrey's enemies. Rassilon formed an alliance with the TARDIS, which had also been infected by Anti-Time. The TARDIS was taken to his Foundry and its outer shell melted down. Zagreus used this to create an anti-time sword. Rassilon planned to send Zagreus to cut the Divergence from time. However Zagreus refused to do Rassilon's bidding and hurled him into the Divergent Universe.

However the Anti-Time infection was removed from the Doctor when he entered. The Kro'ka, an inhabitant of the Divergent Universe who managed border control on the planet Bortresoye, directed the Doctor, his companion Charlotte Pollard and an inhabitant of a zone taken from the planet Eutermes, C'rizz, through the zones for speculative experimentation by the Divergents. However, he ended up working for Rassilon, who planned to use the TARDIS to escape the Divergent Universe. Rassilon created the Church of the Foundation to manipulate events to that the key to the Foundry so that he could escape. However Daqar Keep, an entity created from the Doctor, Charley and the Divergence, caused Rassilon and the Kro'ka to be left trapped.

During the Last Great Time War against the Daleks, Rassilon was revived to continue his work as the Lord President of the Time Lords. To resurrect him, the High Council used the body of Admiral Valerian and imprinted Rassilon's Matrix projection onto him, killing Valerian in the process. to be added

Now completely amoral and determined to avoid death at any cost, Rassilon retro evolved several Time Lords to create a possibility engine, and succeeded with Borusa.400 years into the War, Rassilon discovered from the War Doctor that the Daleks within the Tantulas Eye planned to wipe Gallifrey and the Time Lords from existence. Rassilon, in response, planned to detonate the Tear of Isha in the Tantalus Eye, wiping billions of lives in collateral damage in the process. He consulted Borusa on his plan, who told him it would succeed. Rassilon's plan was foiled by the Doctor, who stole Borusa and the Tear of Isha, using Borusa to wipe the Daleks from the Tantalus Eye without killing all life around it. Rassilon condemned the Doctor's actions and made him an enemy of the Time Lords because of it.

Rassilon intended to spare Gallifrey from destruction on the last day of the war by using the Ultimate Sanction to turn the Time Lords into beings of pure consciousness at the cost of the rest of creation.

Knowing that the Doctor intended to destroy both Time Lords and Daleks by using the Moment, Rassilon contrived to break Gallifrey out of the time-lock that blocked the Last Great Time War from temporal manipulation, and then follow through on his plan. He triumphantly succeeded. For a brief time, Gallifrey broke free of the time lock and appeared in the skies above Earth. However, Rassilon was opposed by the Tenth Doctor, one of only two Time Lord survivors of the war. Rassilon was badly hurt by a last attack by the Master, the other survivor, out of vengeance once he realized that Rassilon had deliberately driven him mad and destroyed his life. The time-lock resumed and Rassilon, the Time Lords, and Gallifrey itself were all flung back to the War to face destruction.

However Rassilon along with Gallifrey got locked into another dimension by all thirteen incarnations of the Doctor. He remained President, and regenerated into an older looking man.

Billions of years into the future Gallifrey escaped its time lock. Rassilon grew concerned about a legend known on Gallifrey, a creature made up of two warrior races mixed together called "The Hybrd" destined to conquer Gallifrey and stand in its ruins. He devised a plan to trap The Twelfth Doctor with assistance of Ashildr from Trap street on Earth. The Doctor's Companion: Clara Oswald's life was lost in the process. The Doctor was teleported inside his own confession dial reconfigured to torture him to reveal what the Hybrid is. After billions of years, The Doctor escaped his imprisonment and arrived on Gallifrey. Rassilion confronted the Doctor and ordered his soldiers to kill him. However they all dropped their guns and went to the Doctor's side. The Doctor then ordered Rassilion to leave the planet, regardless of the fact there were no other planets left.

Supremacy Of The Cybermen

At first, Rassilon hated corruption and was good at detecting it. He is intimidating, materialistic, contumelious, and unforgiving, but was a hero to many Gallifreyans. Indeed, he may have even created the Time Lords in the first place, and therefore was considered a deity among them. Rassilon is a charismatic leader who is capable of inspiring his people. However, he is also a sanctimonious and fraudulent hypocrite, becoming corrupted by power (despite his supposed opposition to such corruption) and increasingly obsessed with avoiding death.

After the loss of Omega, Rassilon wept for him. The other muses that Rassilon's actions were born out of love, albeit short-sighted love. However, some believed Rassilon to actually be behind the plot to murder Omega.

By the end of the Time War, Rassilon had become ruthless, miscreant, blasphemous, power-hungry, conniving, and insane, being willing to destroy the whole of creation rather than accept that it might be best for the Time Lords to die in order for the universe to live. He dreams of changing himself and his fellow Time Lords into beings of pure consciousness, free of physical bodies and the ravages of time. He discovers how to become immortal without having to use regenerations to survive. However, he believes that the secret was too dangerous to share.

Rassilon is also extremely remorseless, traitorous and manipulative, using the Master as a link between Gallifrey and the rest of the Universe which allowed him to temporarily free Gallifrey from the Time Lock. He tries to manipulate the Doctor into destroying the Divergence in the belief that they were too different to live, only to crucially underestimate the Doctor's strength as the Doctor refused to kill even for Rassilon. Just before his return to the Time War, he taunts the Doctor, saying that the final act of his life would be murder, after a failed attempt to fool the Doctor into an alliance with him, and into killing the Master. As he was dragged back into the war, he makes one last hateful attempt to force the Doctor to suffer death as well, before being interrupted by the vengeful and impatient Master. 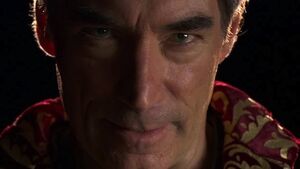 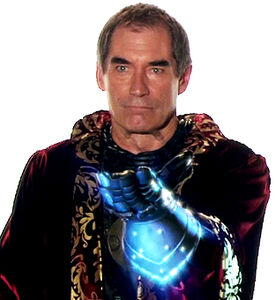 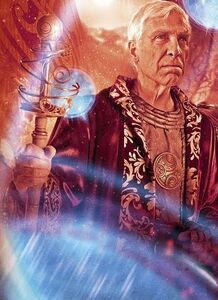 Rassilon as voiced by Terrence Hardiman in Gallifrey: Time War 2. 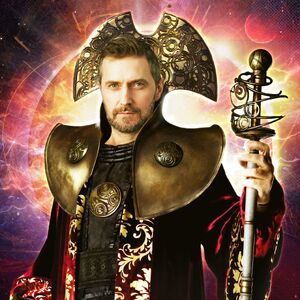 Rassilon, as voiced by Richard Armitage in Gallifrey: Time War 4.
Add a photo to this gallery 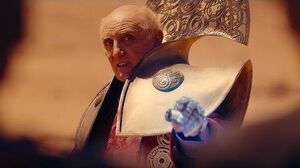 Rassilon Vs The Doctor - Hell Bent - Doctor Who - BBC
Rassilon faces the Doctor and shows his insanity to his people in the process.
Add a photo to this gallery

Retrieved from "https://villains.fandom.com/wiki/Rassilon?oldid=4102182"
Community content is available under CC-BY-SA unless otherwise noted.