Get money through crime.

Roberto Rastapopoulos, or simply Rastapopoulous, is the main antagonist of the Tintin comic book series. He is the archenemy of the series' titular protagonist Tintin.

Rastapopoulos made a cameo appearance at the official dinner, although he was not a villain yet.

Cigars of the Pharaoh

Rastapopulos made his villainous debut in Cigars of the Pharaoh. Onboard the cruise ship the Isis, Sophocles Sarcophagus, an absent-minded Egyptologist, accidentally bumped into Rastapopulous. Tintin defended the professor, much to the fury of Rastapopoulos, who warned Tintin that he would regret crossing his path. As Rastapopoulus stormed off, Tintin recognized him as the "King of Cosmos Pictures". Later he appears in a disguise while he and the fakir kidnapped the crown prince of Gaipajama. He falls over a cliff while trying to kill Tintin, but is revealed to have somehow survived later.

In the follow-up to Cigars of the Pharaoh, The Blue Lotus, it is revealed that Rastapopoulos is the head of the sinister opium cartel which Tintin has been pitting his wits against in the course of the two books. In the end, he is defeated and arrested for his crimes. Sometime later, Rastapopoulos escaped and assumed a new identity, as Marquis de Gorgonzola.

He later reappeared in "The Red Sea Sharks", where he was the leader of a slave dealing organization. He fakes his death at the ending and Tintin assumes he was truly killed.

His last appearance is an attempt to capture the millionaire Laszlo Carreidas on an island and demand extortion from him. After Tintin rescued Carreidas, Rastapopoulos' memory was deleted by the aliens involved in the events (like the memories of everyone else on the island). He, along with Allan and the traitorous pilots, were whisked off to an undisclosed fate in a UFO, leaving their ultimate fates unknown.

Tintin and the Lake of Sharks

In an animated film (that was adapted into a similarly titled book) Tintin and the Lake of Sharks, he is a villain directing operations from a secret underwater base. He is responsible for numerous worldwide robberies of valuable items and plans to steal a duplicating machine invented by Professor Calculus. On the other hand, in an attempt to escape by submarine, Haddock and Tintin both capture him and he is arrested by the Syldavian Police.

Rastapopoulos is a calculating, influential and intelligent character. He is portrayed as particularly dangerous and unscrupulous. He knows how to surround himself with accomplices judiciously chosen for their total lack of morality. His intelligence is demonstrated when he acted with Tintin the first time they met each other. He was very affable but it was only a cover and he soon reveals himself to be a dangerous, ruthless and psychopathic crime lord. Despite his supposed influence, he is very callous and abusive towards his henchmens, as shown in Flight 714, when he tells under the truth's serum that he would dispose of every of them when his plan will succeed, and always raging towards Allan because of his goofs. He is cruel and is ready to commit many crimes, even heinous ones like attempted child murder, slavery to make money or lying to rebels or promising help to Sondonesians rebels who helped him in his plan to get Carreidas's money, by lying to them and putting bombs in theirs boats when they will be useless to him. He was evil since his youth, proved when he told Carreidas he ruined his brothers and sisters and put his parents on unemployement. He is portrayed in a more laughably way in his last appearance, with notably a weird dress taste and more comedic moments, composed of angry outbursts and a head's hunch. Though he is not less evil, in any ways.

Rastapopoulos' cameo in Tintin in America. 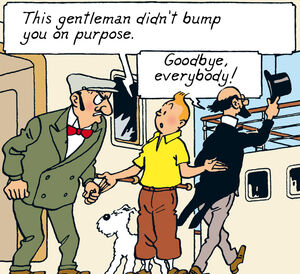 Rastapopoulos encounters Tintin, aboard the Isis. 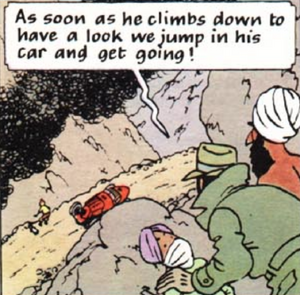 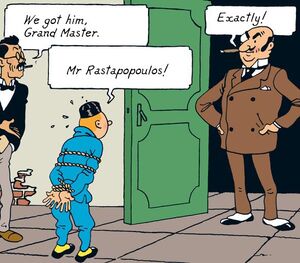 Tintin learns that Rastapopoulos is the leader of the opium-smuggling gang. 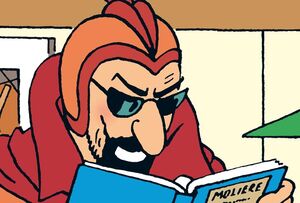 Rastapopoulos as the Marquis di Gorgonzola. 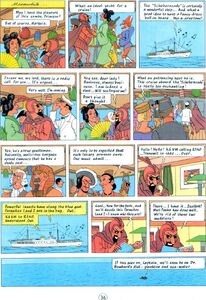 The Marquis di Gorgonzola, aboard his yacht. 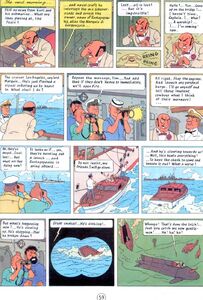 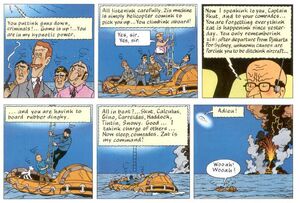 Rastapopoulos and his henchmen are whisked away to an unknown fate. 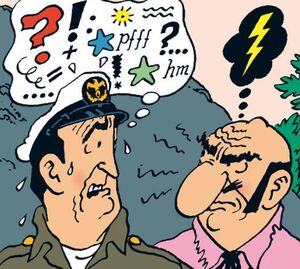 Rastapopopulos is insulted by Allan.

Rastapoupoulos's Portrait
Add a photo to this gallery

Retrieved from "https://villains.fandom.com/wiki/Rastapopoulos?oldid=3780621"
Community content is available under CC-BY-SA unless otherwise noted.