Monstrous Hunter
Rasticore Chaosus Disastervaine, simply known as Rasticore, is a recurring antagonist in the Disney XD series Star vs. the Forces of Evil. He is an interdimensional bounty hunter ordered by Miss Heinous to hunt down Star and Marco in the episode "Gift of the Card". He serves as a supporting antagonist in Season 2 and 3, before becoming a supporting character in Season 4.

He is voiced by Chris Tergliafera, known for voicing Gundham Tanaka from the Danganronpa series and Sigma (later merged into Ultron Sigma) from Marvel vs. Capcom: Infinite.

He has moss green scales with spikes protruding on the shoulders, sharp teeth, a single yellow eye with a slit pupil, a gem replacing his left eye, large gills, and an artificial cybernetic left arm. Rasticore wears a ripped purple cloak that often covers his right arm, dark grayish-blue pants with a brown belt, and black boots.

In "Gift of the Card", after Miss Heinous loses her job as headmistress for St. Olga's Reform School for Wayward princesses, she hires Rasticore to kill the ones responsible: Star and Marco. He uses his dimensional chainsaw to travel to Earth so he can find them. When he gets to Earth, Rasticore is informed by Janna that Star and Marco have gone to Quest Buy. He then travels there to find them and, after trying multiple times to get to them, Rasticore finally catches up. However, when he is about to deliever Marco to Miss Heinous and destroy Star, he is quickly disintegrated by Marco's expired Quest Buy gift card. Rasticore's hand and tracker were eventually delivered back to Miss Heinous and Gemini.

In "Heinous", it is revealed that Rasticore is slowly regenerating, as his hand is already into an arm. Miss Heinous carries his arm and handles it like a baby (much to the jealousy of her assistant Gemini) throughout the episode. She tries to uses it to attack Marco, but all it can do is simply crawl. Miss Heinous then orders Gemini to help it attack but both are defeated by Marco. After Miss Heinous leaves the Diaz household, she is happy to find out that Rasticore's arm has grown an elbow.

In a flashback from "Moon the Undaunted", it was revealed that Rasticore used to be part of Toffee's army and had boths his eyes and arms. After Queen moon cut off Toffee's finger Rasticore and the other monsters retreated into the forest.

In "Princess Turdina", Rasticore has regenerated most of his body in torso form.

In "Monster Bash", Rasticore has almost fully regenerated his entire body. He helps Heinous capture Marco and then defends her from Mina Loveberry. In the end Rasticore and Gemini look surprisingly as Miss Heinous transforms into a monster.

In "Skooled" Rasticore has fully regained his body and storms St. Olga's along with Gemini and Meteora. After seeing how dangerous Meterora has become he quits by making it seem like a break up. Enraged, Meteora takes Gemini's heart and destroys Rastiocre with it, reducing him back to an arm again.

In "Yada Yada Berries" Rasticore has regenerated his body, including his missing eye and arm. However, he has a very short appearance due to being regenerated from just one arm. 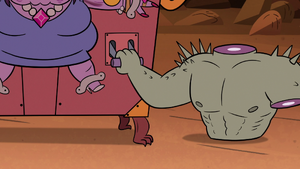 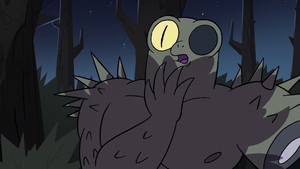 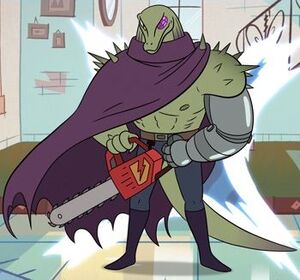 Rasticore opening a portal
Add a photo to this gallery

Retrieved from "https://villains.fandom.com/wiki/Rasticore?oldid=4155965"
Community content is available under CC-BY-SA unless otherwise noted.