Delivering and selling their possessed matresses.

Sell their possessed matresses to their unsuspecting customers and collect their souls (failed).

The Rat and the Weasel are villains in the animated TV series Courage the Cowardly Dog. They are 2 wicked, grotesque animals that own an extremely creepy and unidentified mattress business as well as the said business' deliverymen with a dark-green 19th-century styled coach carriage carried by a black horse with a gold mask-like helmet with one horn (though it is unknown their horse is a unicorn of demonic origin or it is the mask's prop). But what's dangerously unknown to their unsuspecting mortal "customers" is that each of the wicked deliverymen's soft & smooth mattresses carries an unnamed evil spirit waiting to consume the souls of its tired & sleepy prey and possesses their bodies forever.

Rat is hunchbacked, with brown fur and red eyes, and a stitched scar on his side.

The Weasel has purple fur, a rattlesnake tail, a big, blue, bug-eye, and a normal eye.

They first delivered to Muriel Bagge who looking to order a new bed mattress to replaced her current one. After the end of "The Demon in the Mattress", Rat and Weasel were not seen again until the next episode "Courage in the Big Stinkin' City", where they drove Courage to the creepy tower. 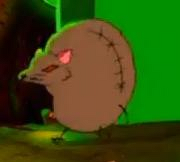 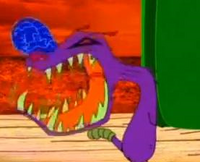 Retrieved from "https://villains.fandom.com/wiki/Rat_%26_Weasel?oldid=4282219"
Community content is available under CC-BY-SA unless otherwise noted.