Be able to drink cider from his boss (succeeded).

Rat is the secondary antagonist in the 2009 stop-motion animated film Fantastic Mr. Fox, based on Roald Dahl's 1970 book of the same name.

He is a rat who serves as Farmer Bean's security guard, guarding the cider room of his farm in hopes of getting to drink some cider. Rat comes across Mr. Fox, his family and his friends when they sneak into the farms of their enemies to steal food, leading Rat to do whatever he can to defend Bean's delicious cider.

He was voiced by Willem Dafoe, who also played Raven Shaddock in Streets of Fire, Eric Masters in To Live and Die in L.A., John Geiger in Speed 2: Cruise Control, Max Schreck in Shadow of the Vampire, the Green Goblin in Sam Raimi's Spider-Man trilogy and Spider-Man: No Way Home, Armando Barillo in Once Upon a Time in Mexico, Nikolai Diavolo in James Bond 007: Everything or Nothing, George Deckert in xXx: State of the Union, Lord Cob in Tales from Earthsea, J.G. Jopling in The Grand Budapest Hotel, Jack Lassen in The Simpsons, Ryuk in Netflix's Death Note, Thomas Wake in The Lighthouse and Clement Hoately in Nightmare Alley.

When Mr. Fox, Kylie and Kristofferson head over to Bean's farm and enter his secret cider cellar, they are confronted by Rat. Foxy notices the badge on his shirt and he heads down as he pulls out his switchblade. Kylie flees and hides as Rat comments on Mrs. Fox. Rat lunges at Mr. Fox, but dodges his attack. As Rat gets back up, they notice Mrs. Bean coming downstairs and Kristofferson makes him fall into an apple room. As Mrs. Bean heads down to grab a couple of bottles for Bean, the three animals hide and Rat tries to get her attention to be free, but she heads back and the trio manage to escape with the cider.

Later, while Badger and the other animals are searching for Kristofferson in the sewers, Rat comes and hands them Bean's ransom note about Kristofferson's kidnapping. As Badger reads the note, Ash comes by and reveals himself to be Mr. Fox's real son, prompting Rat to attack Ash. Ash screams for Mr. Fox to help him as Rat tries to kidnap him, but is stopped by Mrs. Fox. Rat flirts with Mrs. Fox and attacks her and Stan Weasel. Rat manages to kidnap Ash and holds Mrs. Fox hostage until Mr. Fox arrives in the nick of time to confront him. Rat kicks Mrs. Fox and Stan aside and attacks Foxy near an electric fence. Rat gets electrocuted and reveals Kristofferson's location to the animals. Rat reveals that he originally took the job for cider and Foxy feeds him as he dies. Ash informs Foxy about his redemption, but Foxy tells him that he's "just another dead rat behind the garbage pale of a Chinese restaurant" before he disposes of Rat's corpse, sending it float away in the sewers to his watery grave. 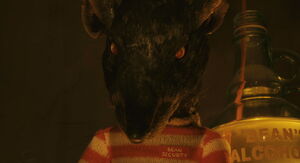 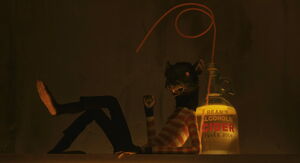 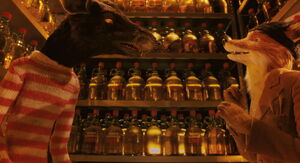 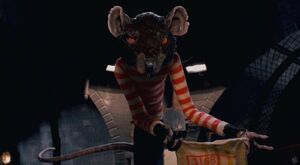 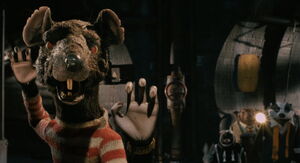 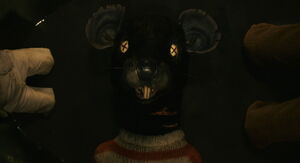 The Death of Rat 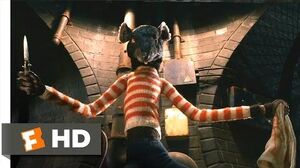