Raiding villages and plundering their livestock.

Obey/fulfill directives of their king and queen.

Hybrid Predators
Rat Creatures (or Hairy Men) are villains in the comic book series Bone. They serve as recurring antagonists and minions of both Kingdok and, by extension, the Hooded One.

The Rat Creature are ape-rat chimeras; they look like rats at birth, with long hairless tails and stubby ears. But around the age of one, due to the legend of the Jekk, they have their tails chopped off and their ears cropped. Rat Creature rulers are much larger and with different body proportions. Kingdok appeared to be a combination of a Rat Creature and a T-Rex, and Queen Maud was incredibly large but taller. Her son, Tyson, was so massive that his tail was as thick as his mother was tall.

Rat Creatures are carnivorous, greedy, cowardly, and vicious. They are known to attack villagers and take their livestock. Rat Creatures live in a crude monarchy, and only leaders are given names. The one exception to this rule is Bartleby who was found and named by Smiley Bone as a cub. Despite returning to the pack, he nevertheless maintained his loyalty and friendship with Smiley and became an ally.

In particular, two recurring Rat Creatures are focus antagonists in the series as they hunt for the "one with the star". While posing something of a threat in their repeated attempts to eat Bone (or "small mammal", as they call him), they are quite bumbling and idiotic in their behavior. In particular, one expresses a desire for quiche, only to be criticized by the other for not "acting like a beast". During the Roque Ja chapter, they become temporary allies of Bone and the others, but quickly betray them to return to Kingdok. By the end of the series, they return to the wild and are given a steaming hot quiche by Bone as a token of Winter Solstice good will. 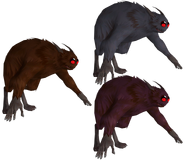 Rat Creatures as they appear in Rose
Add a photo to this gallery
Retrieved from "https://villains.fandom.com/wiki/Rat_Creatures?oldid=3782742"
Community content is available under CC-BY-SA unless otherwise noted.