In Teenage Mutant Ninja Turtles (2003) the Rat King (who is never referred to as such and voiced by David Zen Mansley) appears in the episode "I, Monster", which is an adaptation of his first appearance in the Mirage Comics. Instead of dying like in the comics, the Rat King survives the fall into the silo after his fight with Leonardo.

Throughout "I, Monster", various flashbacks reveal the origin of this series' version of the Rat King; the episode reveals the Rat King was originally the Slayer, from the episode "Bishop's Gambit", a prototype bio-mechanical super soldier created by Agent Bishop using genetically manipulated, alien, the turtles, his own and Splinter's DNA. The Slayer was meant to be used to fight off any alien threats and was given a test run against the Turtles, who broke into Bishop's laboratory looking for the kidnapped Splinter. The Slayer was presumed destroyed when a fight between it, the Turtles, Splinter and Bishop flooded the agent's lab. In actuality, the Slayer survived and was sent hurtling through the sewers, eventually being deposited near the industrial park the events of "I, Monster" take place in. Losing several of its robotic parts, cloaking device and healing ability, the Slayer degenerated into an even more monstrous form, becoming the Rat King, as the rats don't fear him. It is never said how he controls rats, but presumably it is related to his being formed from mutated rat (Splinter's) DNA.

The Rat King later appears in the episode "Wedding Bells and Bytes", secretly watching Casey and April's wedding from a distance with a smile. 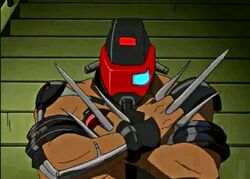 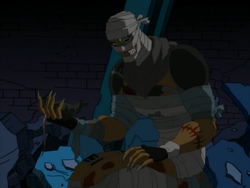 Retrieved from "https://villains.fandom.com/wiki/Rat_King_(2003_TV_series)?oldid=3552071"
Community content is available under CC-BY-SA unless otherwise noted.