Strawinsky and the Mysterious House

Tempt others away from Elohim (failed).

Destroy Elohim and conquer everything (failed).

The Rat King is the main antagonist of the 2012 critically panned Christian animated film Strawinsky and the Mysterious House, which is well-known for its terrible animation and the character "Globglogabgalab".

He is voiced by Eric Clayton.

The animated film concerns four anthropomorphic animals led by the titular Strawinsky, a mole. One day, the group of animal friends discover a strange house. Once they go inside of the house, they meet several bizarre characters such as a Scottish troll who is trying to keep the mysterious house in perfect condition, an anthropomorphic cello who hadn't been played for years, and a gluttonous creature known as the Globgogabgalab, a former elf who had been transformed due to his affixation for books. Rather than reading the books, the Globgogabgalab instead enters into a book to absorb its words. Strawinsky follows the Globgogabgalab into one of the books, where he learns about the evil Rat King who was largely responsible for Globgogabgalab's state as well as for other misdeeds. 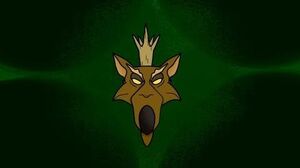 The Rat King Song - Strawinsky and the Mysterious House-0