Feral
Villain by Proxy
Rat Lauer is a one-time villain from The Cleveland Show, only appearing in the episode "A Rodent Like This" as the main antagonist. He is a rabid rat who infested the Brown-Tubbs house, and who Cleveland kept as a pet. He is villainous for giving Donna rabies and later betraying and attacking Cleveland, before getting shot dead by Dee Dee Tubbs.

Dee Dee and Donna Tubbs found a rat in the basement of The Brown-Tubbs House. The whole family evacuated the house, leaving Cleveland behind to take care of it. The rest of the family stayed over at Dee Dee's house. When Cleveland was about to kill the rat, he realized he could have the house to himself, if he just kept it around, so he let it live, and called Donna on the phone, saying he couldn't find hide nor hair of it.

Cleveland befriended the rat and started treating it like a pet, even naming it "Rat Lauer". As he grew more accustomed to him, he and the house became more of a filthy wreck. However, by the time Donna came back, she was not pleased with how Cleveland befriended Rat Lauer and demanded he get rid of him. Cleveland refused and shortly afterwards, Rat Lauer viciously attacked Donna, biting her on the neck.

Cleveland takes Donna and Rat Lauer to Dr. Fist, hoping she didn't get rabies. Dr. Fist says the only way to find out it to test the rat for rabies, and the only way to do that is to kill it. Cleveland is hesitant to watch his friend die, but asks at least for the honor of killing Rat Lauer, himself. He takes the rat out to the woods, carrying him in a bag, but before smashing him with a rock, he opens the bag to get a look at him one last time. Rat Lauer jumps out of the bag, foaming at the mouth and with red eyes and attacks Cleveland. Cleveland and Donna manage to get back into the car before Rat Lauer bit Cleveland or Donna a second time. They try to drive away, but Cleveland finds out he dropped his keys outside, while being attacked.

Cleveland sneaks out of the car in an attempt to get his keys, and makes it back in the car safely, only to find out, Rat Lauer got in there too. They freak out as Rat Lauer attacks and paws at both of them, but before it can do anymre damage, he gets shot dead, revealing Dee Dee Tubbs has returned to save her daughter. This happy moment doesn't last long, as it's soon found out that Rat Lauer did have rabies and they wasted enough time doing Cleveland's stupid "proper sendoff", that it had already gotten to Donna and made her go full on feral.

When Rat Lauer was first introduced, he was oddly civilized for a wild animal, almost to the point of animal anthropomorphism. When he was fed and cared for by Cleveland, he grew attached to him like a pet. He had the same intelligence as a dog, being trained enough to be taken for a walk and to play fetch. 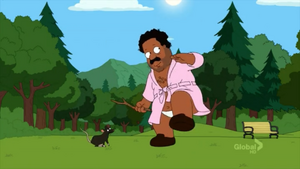 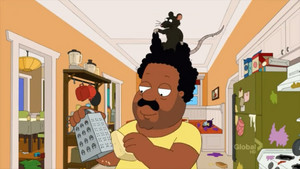 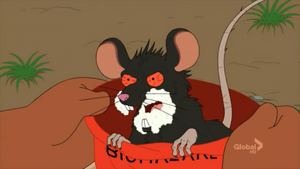