Rat Things, also known as semi-autonomous guard units, were built to be the guard force for the 'Mr. Lee's Greater Hong Kong' franchise of city-states. Rat Things were invented by Mr. Ng, the owner and administrator of Ng Security Industries, who was severely handicapped after a helicopter accident in Vietnam and voluntarily had himself turned into a cybernetic organism to regain his lost mobility. However, they escaped and spread throughout the post-apocalyptic United States, killing people indiscriminately and wreaking extreme havoc and destruction wherever they went.

Rat Things are specially engineered American Pit Bull Terrier clones, with genetic and biological modifications designed to optimize their strength, endurance, agility, reflexes, and aggression. As a result, they are larger than normal Pit Bulls, being closer in size to a Rottweiler. They are also hybrids, as their DNA is spliced with rodent DNA; the most obviously manifestation of their hybrid nature is their long, prehensile, whip-like rodent tails. In addition, they are surgically augmented with cybernetic components and implants that give them superhuman strength and durability, as well as truly extraordinary speed comparable to the world's fastest land vehicles. These implants also make their teeth and claws far deadlier than a normal animal's and enable them to use their tails as equally deadly weapons, to the point where they can effortlessly decapitate or dismember humans with a single bite or slash, and they can even tear through solid steel. Should their masters desire to use them in a less lethal capacity, they can use their tails to knock people down and disarm people of weapons, or even wrap their tails around people to subdue them.

Like other technology in Snow Crash, Rat Things are powered by a nuclear isotope power system, which requires extensive cooling. The Rat Things are cooled by a system of radiator-like fins over which air passes when they are running. When they are stopped, they must remain in their hutches (effectively dog houses), where they are cooled by jets of water sprayed over their cooling fins. When running, the Rat Things can travel over 700 miles per hour, and even break the sound barrier. When they were initially in captivity, they were forbidden from using this ability except in emergencies, but after escaping they constantly run at full speed all the time (they are no longer capable of staying still, since they no longer have specially cooled 'dog houses' to stay in), with devastating consequences for them and for everyone and everything around them.

Rat Things still have the basic mindset of dogs. However, their brains and endocrine systems are modified so that they are incapable of feeling empathy or any emotions other than anger, hatred, and fear. When in captivity, they were kept in a virtual reality program emulating the life experience of a normal dog, kept on an endless loop. They can also communicate with other Rat Things by "barking" via wireless transmissions. Their minds are largely controlled by their implants, but they can sometimes act independently of their programming, which ultimately led to their escape from the facilities they were held captive in. (While they could easily jump over the fences that kept them trapped, they were programmed to believe that they couldn't, and for a long time they never bothered trying. When one Rat Thing finally tried and made it over the fence, the others all simultaneously realized that they could do it too, and they all broke free.)

It should be noted that even after their escape, they were still just following their programming and instincts. Unfortunately, the combination of their security programming, their perpetual fear and rage, and their natural predatory nature led them to become vicious and destructive killers, brutally murdering everyone and destroying everything in their path.

Throughout the novel, the protagonists discover the origins and nature of the Rat Things, although they never actually find a way to kill or defeat the monsters. However, in one instance, a Rat Thing is killed after it crashes into the engine of a jet plane, resulting in a massive explosion.

Since the Rat Things are physically incapable of slowing down or standing still without their internal power core melting down, it seems inevitable that they will all eventually collide with something that either kills them directly (as with the jet engine) or brings them to a stop, or simply run out of power. Unfortunately, they may very well cause a truly apocalyptic amount of destruction until then, especially since their power core will detonate in a small-scale nuclear explosion if it melts down.

It's worth noting that Neal Stephenson's later novel The Diamond Age is set in the same universe as Snow Crash, several decades after the events of the first book, and features no mention of the Rat Things. Thus, it can be presumed that they were defeated or burned themselves out at some point. 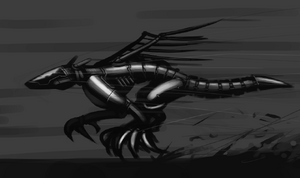 Cyborg
Add a photo to this gallery
Retrieved from "https://villains.fandom.com/wiki/Rat_Things_(Snow_Crash)?oldid=3891468"
Community content is available under CC-BY-SA unless otherwise noted.