Robotic Pet
Ratbat is one of Soundwave's minions & pets, alongside with Ravage, Laserbeak, Rumble & Frenzy. He is a recurring villain in the Transformers franchise.

In the original Transformers series, Ratbat was one of the several Transformers who transforms into a cassette. In the American series, like the other cassettes that turned into animals, Ratbat was not capable of speech, and was likened more to a pet than an equal member of the Decepticon forces. However, in the Japanese series, he and the other cassettes possessed the power of speech, though their roles seemed no different. Ratbat first appeared in The Transformers: The Movie and in the third season of the series, he was often sent on spying missions. However, he also appeared in the OVA Scramble City, which takes place before the movie, but reportedly was made after the movie was made. He last appeared in "The Return of Optimus Prime, Part 1" as he was seen giving the latest piece of information that two human scientists had discovered the body of Optimus Prime, which made Galvatron to destroy once and for all.

In the G1 comics, in contrast to his pet role in the cartoon, Ratbat is a major antagonist who serves as Decepticon leader for a time. He is first seen in the UK-exclusive stories, which shows him rising to power on Cybertron following Straxus' failed attempt to gain control of Megatron's body. Thereafter, in the US comics, he is shown directing the actions of the Earth Decepticon faction led by Shockwave, eventually taking over effective control of them, especially after Shockwave is apparently killed battling Fortress Maximus. He is noted for his obsession with the economical use of fuel.

In his last story arc, he attempts to gain the power of the Underbase only to be betrayed by Starscream, who gains the power himself. Ratbat allies himself with both the Autobots and the Decepticon faction led by Scorponok but the alliance breaks down amid suspicions that the other parties are seeking the Underbase for themselves and Ratbat is killed by Scorponok. 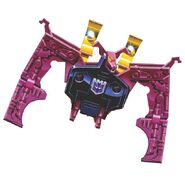 Ratbat in Regeneration One.