Communicating with and commanding rats

Kidnap and shelter neglected people and kill them if they revolt against him (temporarily succeeded).

Patrick Fitz, also known as Ratboy, is the main antagonist in the Batman Beyond episode "Rats". He is an outcast with rat-like deformities who is able to communicate with and control rats.

He was voiced by Taran Noah Smith.

Patrick, for unknown reasons, was born with an unusual appearance. He had the appearance of that of a rat, which prompted unfriendly kids to call him Ratboy. Tired of being ridiculed and degraded, Patrick moved to the sewers, looking for seclusion. There, he met with "Gotham's secret shame", giant man-eating rats, and befriended them.

He hoarded unwanted items and discarded property, proclaiming himself a "Pack Rat". He also developed hybrid flowers that grew without photosynthesis. His interest in the neglected and unappreciated was eventually expanded to people. He observed them from below, particularly those who he thought to be neglected like him. Then, he kidnapped them and offered them shelter from the ungrateful world. However, Patrick's kindness quickly turned to murderous anger when his hostages revolted against him. Patrick, then more assertive in his own habitat, killed those who would mock him by feeding them to his rats.

Ratboy makes himself known when he takes an interest in Dana Tan. He started stalking her, leaving flowers with the note saying "I'll be there for you". When Dana was waiting for Terry McGinnis at Rhino's Chili, Patrick sent a couple of his hound rats to abduct her. Ratboy appeared and showed Dana his habitat and hobbies. Unimpressed, she tried to trick Patrick into taking her to the surface for some Chili. Patrick didn't want to risk losing her, so he went by himself. He barged into Rhino's Chili and was spotted by Batman, who then overheard him mentioning Dana.

Patrick returned to his place just on time to save Dana from being attacked by a pack of rats. Dana quickly grew impatient with her captivity. Patrick mistook her frustration for mockery and set his rats on her, at which time Batman stepped in and fought off the rodent army. In the brawl, a burning hockey stick made contact with dumped toxic waste, blowing everything up and seemingly killed Patrick as well, though no body was found.

Ratboy returns in the comic Batman Beyond Volume 2 #17, where he indeed survived the explosion. However, he has third degree burns over most of his body and his left eye was now blind. Ratboy tries to get revenge on Dana and his last name is revealed, despite his last name not being mentioned on the Batman Beyond TV series.

Ratboy sets his plan of vengeance in motion as he has his rats attack the classroom Terry and Dana are at. The classroom is screaming for help as the rats bite students but suddenly the rats are called away by Ratboy by using the air ducts. The rats disappear and Terry heads back to the Batcave to get Bruce's input. Bruce tells Terry that he has been noticing numerous accounts of rat infestations being reported and Terry speculates that these rat infestations would be profitable to someone in the extermination business.

On the other side of Gotham, Ratboy is working his angle as an expert exterminator. Ratboy names his lucrative business "Rat Patrol" and he uses a special whistle that the rats hypnotically respond to. When Ratboy's clients see his disfigurements, Ratboy explains that the chemicals he uses caused a skin condition but he calms them down by saying that he has refined his methods and his condition isn't contagious. Ratboy also has used his profits to do some dental work in order to straighten his teeth. After finishing a job at Carter-Bluestein Industries, Ratboy tells his lead rat which he affectionately named Dana, that his next play is at O'Toole's Secure Storage. Bruce alerts Terry that there is activity at the warehouse district.

Unfortunately, Terry arrives at O'Toole's Secure Storage one minute too late. Tim McDougal, the overnight security guard explains to GCPD that he was distracted by rats in the security office while Ratboy looted the place. Terry observes the crime scene thoroughly and discovers that the wires which is connected to silent alarm, have been chewed through. Terry figures that these rats could only have been trained to be this intelligent by Ratboy and Ratboy's endgame will eventually be Dana.

Terry follows a pack of rats that were just leaving Dana's home to a mansion nearby Wayne Manor. Bruce sends Terry the information as to who the house is registered to. Terry learns from the registry that Ratboy's full name is Patrick Fitz and he used his profits from his so called exterminating business to buy a mansion in order to impress Dana. Terry continues to follow the trail of rats to the wine cellar of the mansion where the rats immediately head down a iron grate in the cellar floor. Terry removes the grate, drops down and falls right into the sewers.

Terry is greeted by Ratboy and his horde of rats. Terry defeats Ratboy and his horde by using his batarangs to break the sewage pipes. The sewage water begins to flood the entire area and like rats in a sinking ship, Ratboy's vermin family desert him for their fear of drowning. Terry tries to save Ratboy from the flooding waters but Ratboy refuses to let Dana the rat drown so he dives in after her. Terry and Dana Tan know that this isn't the last they've heard of Ratboy. 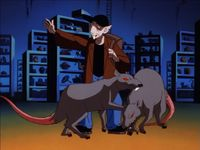 Ratboy with his rat companions.

Ratboy commanding his rats in an attempt to kill Batman and Dana. 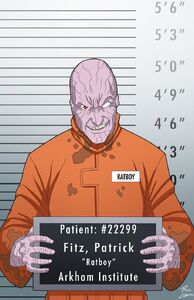 Ratboy's appearance after the episode in the comics. 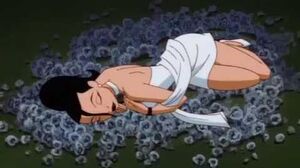 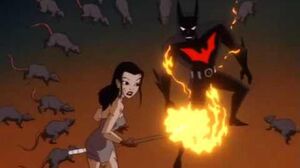