The Ratings Monster is a one-time villain from the Cartoon Network original series, Teen Titans Go!, only appearing in the episode "Toddler Titans ... Yay!". He is a giant monster from a toddler version of their show that represents the poor ratings of their show. 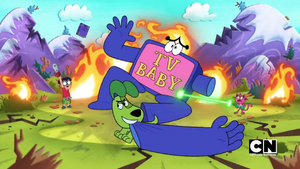 The Teen Titans beating the Ratings Monster with moderate cartoon violence.
Add a photo to this gallery

Retrieved from "https://villains.fandom.com/wiki/Ratings_Monster?oldid=4066563"
Community content is available under CC-BY-SA unless otherwise noted.