The Rats (or Elgen Rats) are major antagonists in the Michael Vey book series by Richard Paul Evans. They are electrified rats that serve as the main source of power and prisoner execution for the Elgen's many Starxource Plants. They first appeared in Michael Vey: Rise of the Elgen.

The rats were biologically engineered by the Elgen Corporation to produce electricity similarly to the Glows, presumably with an updated or redesigned version of the electron fusion MEI machine. The rats are stored in the Elgen's Starxource power plants in a large area called "The Bowl". Almost a million rats are stored there, generating electricity to be absorbed by a copper grid, which reroutes the power to the entire plant. The grid pattern allows feces to fall and collect. A curved blade sweep attached to the center of the Bowl causes the rats to run, creating motion-fueled electricity. The blade also scoops meal remains and dead rats off of the grid into troughs that lead to grinders, which turn the dead remains into a powder that is baked and served back to the rats as "Rabisk", short for rat biscuits. Rabisk is also served as the primary food source for Elgen prisoners.

Water applied directly to the rats' bodies will electrocute and kill them (similarly to Zeus). Water is drunk from small disks positioned just low enough below the grid so that rats can lick water off of them.

The rats are fed roughly 29 tons of food a day: most of it consisting of raw meat, live bulls, and Rabisk. However, when the Elgen wishes to execute an individual, they put him/her in the chute leading to the Bowl and have the rats devour him/her alive.

Sometime after the Glows were born, the Elgen Corporation updated the MEI machine and biologically changed their genetics to make them electric. After breeding said rats to use in the corporation's power plants, the Elgen was turned into a profitable company.

The rats are introduced by Dr. Hatch to the Glows as they are touring the Peruvian Starxource Plant. Hatch had previously sentenced a disobedient and uncooperative guard to the Bowl, and was now showing the youths what was going to happen to hm. The Glows watch as the rats devour some bulls, then move on.

When Hatch wants to torture Michael Vey's kidnapped mother in a mental manner, he has Tara make her hallucinate about a few thousand rats attacking her.

Later, during a presentation used to brainwash prisoners, Hatch shows them a video of the guard being eaten alive by the rats, horrifying the prisoners.

When Michael and the Electroclan arrive to save Michael's mother, they are discovered and lured into a long corridor. Hatch then releases the rats after them, and the Electroclan tries to escape. However, the rats catch up and begin attacking. Their electricity has no effect on the similarly powered Electroclan, but they do injure them with their teeth and nails. The Electroclan fights back, but the rats' number overwhelms them. They all soon climb to safety, and Zeus risks his own life by setting off the fire sprinklers to shower and electrocute the rats. The Electroclan manages to escape, but Michael is captured. Hatch reveals to Michael (who is detained) that he is to be fed to the dangerous group of hungry rats.

Michael is tied up and put on the conveyor in the chute leading to the Bowl. The rats start to swarm him, but Michael suddenly starts absorbing the immense amounts of electricity from the rats and the Bowl. He melts through his bonds and magnetically holds onto the chute, so powerful that he vaporizes the rats around him. He blasts them and the observation window (where Hatch and the Glows were) with lightning before the rest of the Electroclan shuts off the power and allows Michael to escape.

The rats are mentioned as power sources for the other Starxource Plants everywhere in the world in the following books, and Tara and Torstyn are sentenced to be fed to them after their betrayal.

It is unknown what happens to the remaining rats after the events of The Final Spark.

The rats are described as having a bright yellowish-orange glow that makes them collectively look like electric lava. Almost a million rats occupy an area at a time, allowing for extreme light and heat. 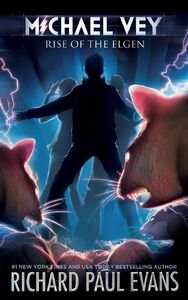 The rats on the cover of Michael Vey: Rise of the Elgen. 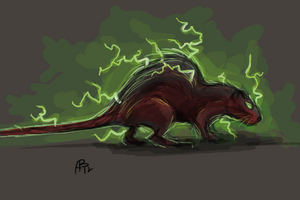 Artwork of a single electric rat.
Add a photo to this gallery

Retrieved from "https://villains.fandom.com/wiki/Rats_(Michael_Vey)?oldid=3780730"
Community content is available under CC-BY-SA unless otherwise noted.