Gustav Kruger, also known as the Rattler, is a fictional character from Marvel Comics introduced as an enemy of Captain America. He is one of the members of the Serpent Society.

Hailing from Poland, Gustav Krueger was given a bionic tail which he uses to create shockwaves and vibrations. The details and motivations of this are unclear.

Krueger joined the Serpent Society, a mercenary organization for criminals styled around snakes, under the leadership of Sidewinder. During the Rattler's initiation into the Serpent Society, he and his fellow Serpents Cobra and Anaconda were ambushed by the hero Captain America, but Rattler was able to use his tail to stop Captain America's shield from doing any damage.

He later battled Captain America again after being tricked by the Porcupine to a trap: Porcupine told the Society he had captured Captain America and Rattler went for the body along with Diamondback, Death Adder, and Cottonmouth. During the ensuing fight with Captain America, Rattler used his bionic tail to send vibrations coursing through the hero's body, disorienting him. However, he was eventually thrown into a pillar by his tail, knocking him out for the battle.

The Rattler joined Viper during her invasion of the Serpent Society, and then followed King Cobra's instructions when he became leader. During the battle with the X-Men after Longshot (Mojoverse) had found the missing artifact they were searching for, Rattler created an avalanche by rattling his tail. Unfortunately, it took both Longshot and Rattler out in the process.

He was very popular with the ladies of the Serpent Society, as Black Mamba recommended him to Diamondback for a "good time," and Diamondback later tried to set Fer-De-Lance up with him.

Recently, Rattler joined the group of criminals aiding the Thunderbolts during the Civil War, alongside fellow Serpent Society members Cobra and Bushmaster.

He was later killed by the new Scourge, who found him about to commit a robbery.

The Rattler appears in The Avengers: Earth's Mightiest Heroes episodes "Ultron-5", "Along Came a Spider...", and "Yellowjacket", voiced by Chris Cox. He is a member of the Serpent Society. 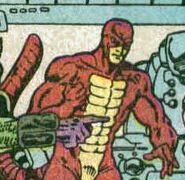 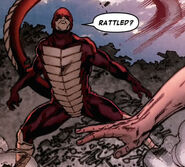 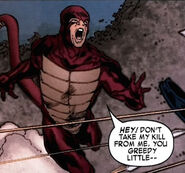 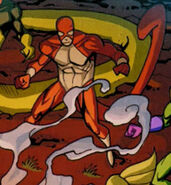 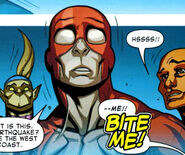 Add a photo to this gallery
Retrieved from "https://villains.fandom.com/wiki/Rattler_(Gustav_Kruger)?oldid=3543196"
Community content is available under CC-BY-SA unless otherwise noted.