Humiliating and terrorizing his victims.

Get rid of (if not kill) Rango (succeeded in a first moment but then failed).

Get his revenge on the Mayor (succeeded).

Rattlesnake Jake Douglas (simply known as Rattlesnake Jake) is the secondary antagonist of Nickelodeon's 23rd feature film Rango. As his name implies, he is a dangerous Western diamondback rattlesnake who never leaves the town of Dirt without taking a single soul.

Rattlesnake Jake is a dangerous western diamondback rattlesnake wearing a cowboy hat, shedded skin as a vest, and with a Gatling gun in place of his rattle on the tip of his tail. He is also shown to have small black scales on his upper lip that greatly resembles a mustache.

He was voiced by Bill Nighy, who also played Davy Jones from the Pirates of the Caribbean films, Prince Naberius in I, Frankenstein, and Viktor from Underworld.

Rattlesnake Jake is characterized as extremely cruel, greedy, vicious, arrogant, and destructive, although he does have a sense of honor, as shown at the end. While incredibly experienced in battle, he also seems to be very familiar with utilizing fear, humiliation, and power-plays to get inside his enemies' heads. This was shown in the film, as he openly shamed Rango in front of all the people in Dirt and managed to keep everyone paralyzed with fear using only words and his frightening presence. This suggests that he can be quite cunning and manipulative.

Jake is also shown to be incredibly sagacious and perceptive, considering the fact that when the hill folks disguised themselves as a hawk in an attempt to scare him, he quickly discovered that it was a trick just by noting a very minor mistake they made. The combination of manipulation and perceptiveness suggests an intelligence far beyond that of a simple thug. Jake is a living legend among people of the desert and is known as a Grim Reaper-like figure, even saying himself that he comes from Hell and that he never leaves town without taking someone's soul. The only creature that Rattlesnake Jake fears is the Hawk, to which everyone else in Dirt also fears.

However, he is shown to have a code of honor, as he will side with others if they have a common enemy or he legitimately respects or admires someone.

Early in the film, Rango claims that Rattlesnake Jake is his brother when he is first brought up by the townspeople while making up his overblown heroic persona; thus, when Jake attacks the town, he uses this bold-faced lie to expose Rango as a phony in front of everyone and drive him out of town.

It is then revealed that Jake is working for the evil Mayor Tortoise John and, in a later scene, he is seen forcing Beans to sign away the deed of her father's ranch to the mayor and almost strangles her to death before Rango shows up again outside.

With the help from the hill clan, Rango defeats Rattlesnake Jake and aims his gun at him. Jake taunts him but sees that Rango has the killing intent in them which he previously lacked, just as he is about to shoot him, the Mayor stops him by threatening Beans' life, forcing Rango to surrender to the Mayor.

During the final confrontation, the Mayor betrays Rattlesnake Jake by pointing Rango's gun on him, declaring him another relic of the Old West that will soon be destroyed and forgotten along with the rest of the town. When the Mayor tries to shoot, it turns out that the last bullet was taken by Rango, who then uses it to break open the giant water bottle he and Beans were drowning in and flush everyone out of the town hall into the streets, where Rango finally manages to subdue the Mayor. Rango then turns the defeated Mayor over to Rattlesnake Jake, who then nods his hat to Rango for saving his life, acknowledging him as another great desert legend that will thrive.

Rattlesnake Jake then turns his rage towards the Mayor by telling him the exact same thing the Mayor said to him, "Pretty soon no one will believe you even existed", in a show of cruel irony to him. Jake then snatches the Mayor up in his tail and carries the screaming tortoise out into the desert to punish him for his betrayal, thus taking a soul, as Bad Bill said. 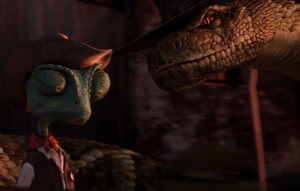 Jake exposing Rango in front of the town. 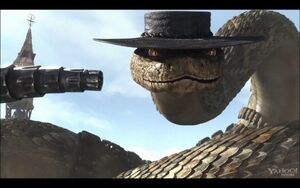 Jake engaging Rango in a duel. 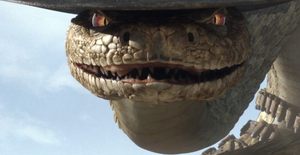 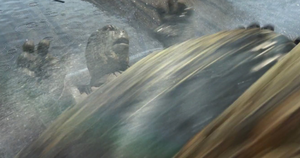 Tortoise John being overpowered by Rattlesnake Jake.
Add a photo to this gallery

Retrieved from "https://villains.fandom.com/wiki/Rattlesnake_Jake?oldid=2470720"
Community content is available under CC-BY-SA unless otherwise noted.