Ravagers are a race of bat-like Creatures of Grimm from the American animated webseries RWBY, first appearing in the 2019 novel RWBY: After the Fall.

Like other Grimm, Ravagers were created by the God of Darkness in an attempt to rid the world of life, and remained even after he and the God of Light abandoned Remnant.

Ravagers are native to the kingdom of Vacuo, flying over the desert and attacking settlements. In After the Fall, Ravagers are among the Grimm that keep attacking the settlements that Edward Caspian, August Caspian, Carmine Esclados, and Bertilak Celadon travel through, patially due to August's Semblance of amplifying emotions, especially negative ones, which attracts Grimm.

Whenever one of these "mood bombs" goes off, Ravagers are among the first Grimm to arrive, attacking with their claws and teeth. Yatsuhashi defends a young mother and her infant son from them, and they attack by berating him with sonic screeches. Yatsuhashi manages to fight them off, but even after they flee the settlement, Ravagers follow them.

During the battle with Carmine and Bertilak, Ravages swarm due to the negative emotions, and Coco has to shoot them down with her minigun in order to protect themselves.

Later, Shade Academy attempts a reinitiation. Velvet is sent to retrieve a golden trinket in a cave with help from Octavia Ember, and they accidentally wake up a swarm of Ravagers. Velvet manages to stun them with their camera flash as they make their escape.

When The Crown attacks Vacuo, Ravagers are among the Grimm that are drawn to the carnage as well as Gillian Asturias' Aura. One grabs Gillian and attempts to fly away with her, but she kills it with her arrows and rides another one back to the ground.

Ravagers are not particularly powerful, but they use their fast flight and quick reflexes to dodge and attack. They are incedibly fast, and use their elongated fangs and claws to bite and slash at victims. At adulthood, their claws are described to be as long as swords. They can also emit a sonic screech from their mouths. 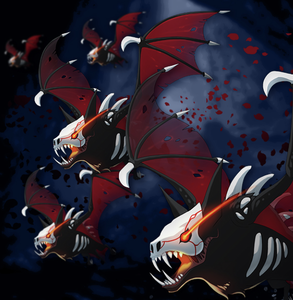 Art of Ravagers from Amity Arena 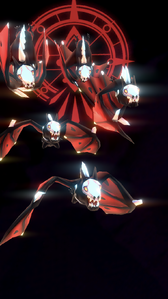 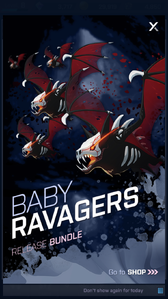