Raven is one of That Man's servants and one of the villains in Guilty Gear series. Little is known of him, but he does share some sort of connection with Axl Low, which That Man describes as being "parallel existences" of each other. Raven's body can regenerate almost instantly from nearly any physical damage caused to it.

He is voiced by Shigeru Sakano and Hiroki Yasumoto in the Japanese version, and by Jamieson Price in the English version.

Raven's clothing is notably different in Overture, in which he wears a wing-like mantle, and a steel mask with a single gold coin over his left eye (in the Greek tradition of placing coins over the eyes of the dead, indicating that he is "half-dead"). But his head still has the spike (the spike that goes through from the back to the front of his forehead).

In his appearances prior to Guilty Gear 2: Overture, Raven wears a black body suit with a bird-shaped breastplate and long boots. His shoulders, forearms, and calves are pierced with long needles, and his forearms are loosely wrapped in bandages. His hair is long, varying between shoulder and waist length depending on the artwork. A ragged vertical scar runs across the right side of his face and across his right eye socket, which emanates a silver light, and a series of small needle piercings run parallel to the scar.

In Guilty Gear 2: Overture, Raven wears an elaborate mask with an asymmetrical cross-shaped visor and a golden coin placed over his left eye. He wears a wing-shaped black mantle with a collar designed to look like feathers; when closed the mantle cloaks his entire body. The back of the mantle bears the kanji karasu, the interior of the mantle is decorated with large glyphs, and he wears a green, bird-shaped emblem on his chest. Beneath the mantle he wears an armored black body suit with fin-like extensions on his arms and a kilt with hanging leather straps around his waist. He wears armor rings which have long needles affixed to them on the index and middle fingers of both hands, which he uses like claws in battle. His hair is shoulder length.

In Guilty Gear Xrd: Revelator, Raven wears a wing-shaped hooded mantle; the hood features six metallic protrusions and is decorated with shapes that resemble eyes. A silver wing design is emblazoned on the back of the mantle. His shoulders are draped with green leather straps with cross-shaped silver buckles, and a larger cross buckle rests on his chest with the word "yata" written on it. Beneath the mantle he wears a black sleeveless vest with crisscrossed white bands, black pants, baggy black chaps attached to his waist with oversized buckles, and fold over boots with spiked studs and cross buckles. He wears black fingerless gloves and cross-shaped armor rings which have long, glowing red needles affixed to them on the index and middle fingers of both hands, which he uses like claws in battle. His hair is much shorter than previous appearances, his right eye is no longer damaged, and the iris and pupil of his left eye is replaced with a golden coin.

Raven is generally calm and polite but has a penchant for masochism, as intense pain is one of the few sensations his immortal body can feel. After living for more than a thousand years, Raven grew incredibly jaded and bored with the world, discarding the values he once held. After encountering That Man, his life was given new purpose, and in gratitude Raven swore allegiance to him.

Raven is an immortal who was born in medieval Germany, over a thousand years before the events of Guilty Gear. As a young man he was recruited into an army and became an accomplished knight, waging war in foreign lands. During one campaign he and his allies were cut off from their supply lines and were ultimately ambushed in a night raid. After attempting to flee on horseback he was struck down by a hail of arrows and was then brutally stabbed to death by his enemies.

However, rather than dying, he found himself in a strange "cylindrical space" filled with window-like mirrors. There, he had the sensation of being caged with predatory birds, and felt their stares boring into him, eventually transforming into excruciating pain that pierced every inch of his body until he experienced the maximum amount of pain a human can experience.

He awoke in a pool of his own blood to find that all his wounds had healed, wondering if he had been rejected by Valhalla; this was his first "death," and the first manifestation of his immortality. After this point he ceased aging and spent the next thousand years wandering the world, gradually becoming apathetic and tired of living, even attempting to end his own life by driving a specially-designed instrument with spikes on either end through his brain stem. Eventually he met That Man, who gave his life purpose, as a "witness to history."

Raven's debut appearance in the Guilty Gear series. In this novel Raven is sent by That Man to recover a sample of Solaria's resonance data. Appearing first as a mysterious entity identified only as "The Watcher," he observes the events. He eventually intervenes, confronting Sol Badguy; Sol attempts to incinerate Raven with a powerful Tyrant Rave, but Raven simply regenerates his charred flesh and expresses disappointment that he didn't feel even a little warmth. He later recovers the sample from Faust and Ky Kiske, defeating Faust in battle in extra-dimensional space. Before vanishing with the specimen he tells Ky to warn Sol not to approach the resonance.

Raven appears briefly in Sol's third ending of Guilty Gear X Plus, along with That Man and his other two servants. He is ordered by That Man to monitor Dizzy.

Raven is a recurring non-playable character in several of the story paths and endings in Guilty Gear XX #Reload and Guilty Gear XX Accent Core, typically travelling with That Man or acting on his behalf as a messenger. He notably puts an end to I-No's rampage by sealing her in a crystal prison.

Raven, dubbed the "Undying Disease" for his ability to regenerate from any wound, appears as a boss and playable DLC character in Guilty Gear 2: Overture.

He appears before Sol, Sin Kiske, and Izuna in Illyria Castle and is attacked by Sol, who mistakenly believes That Man to be behind the ongoing incident. After Sol defeats him using the power of the Backyard, Raven declares Sol to be "one of the wheels that moves the world" and laments that he can't kill him yet, then vanishes. After Valentine's defeat he discusses the possibility of more Valentines appearing with That Man, and informs him that Sol's Dragon Install is beginning to erode. Raven expresses concern that Sol may stand in their way again, but That Man tells him not to interfere and to allow history write its own course.

Raven will be appearing as a playable character in the console edition of Guilty Gear Xrd: Revelator.

Raven is sent by That Man to help Sol and Sin rescue Elphelt by recovering Jack-O', so that she can take her place as the vessel for Justice. When confronted by Sin about That Man's goals, Raven explains that he, I-No, and That Man have grown apathetic due to their unnaturally long lifespans, and wish to prevent mankind from suffering a similar fate by correcting a past mistake. After Sin defeats Jack-O', Raven offers them his gratitude and teleports himself and Jack-O away.

In battle, he surrounds himself in green flames, and fights using needles which are capable of stunning opponents and creating "Slow Fields", along with a variety of abilities including teleportation, dispersing into a cloud of feathers, and attacking ravens. It is said that his abilities in material displacement and spacial distortion outstrip even the likes of Faust, who is considered a virtual prodigy of Magic. Due to his immortal body, he is incapable of experiencing any bodily sensation, including pain. He is also capable of influencing causality because of his constant and unchanging existence. 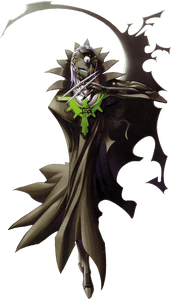 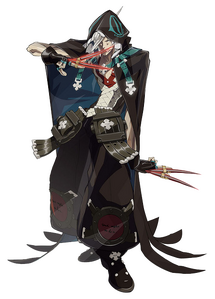 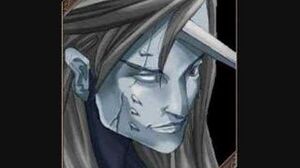