Midnight Absinthe
Sensei (by the children of Roost)

Taking care of the Roost.

Natasha Cioara, better known by her codename of Raven, is an antagonist in the video game Honkai Impact 3rd. She is affiliated with the World Serpent terrorist organization led by Kevin Kaslana.

Raven made her first appearance at Chapter XIII, and becomes the main antagonist of Chapter XIV and XVI before becoming an anti-hero and ultimately, a playable character. Her playable form is known as "Midnight Absinthe", an Imaginary (IMG) type Bow character.

Natasha has short, light gray hair, and red eyes. She wears a black-fuchsia uniform with a hood resembling her eponymous bird, which she takes it off when she is not around people for fear that they will confuse her for a young girl. In the Haxxor Bunny event, she wears a dark gray waiter uniform consisting of a dark gray shirt with the word "spark" written on it and receipts pinned to the left side of her chest along with a black pencil skirt and thigh boots.

In her early life, she sports a brown hair tied in short braids and wears a white dress.

Natasha is a cold, ruthless mercenary. She doesn't think twice about eliminating targets whether they are human (like Kiana) or not. On the other hand, she is kind and caring, like when taking care of Sora and the children who live in Nagazora and using all her efforts to bring them to a safe place to live. In spite of her callous personality, she is rather a caring individual to her adoptive daughter, Sora alongside the refugee of Nagazora, who are known as the Roost.

Raven was born as Natasha Cioara on Siberia. During the 2nd Honkai War of 2000, she and her brother were exposed to the Herrscher of the Void's Honkai energy as a result of her core. Cecilia Schariac who uses her own blood as a sacrifice purged the Honkai energy around the village. At the time, she gain resistance to Honkai.

At some time after the 2nd Honkai War, Natasha was separated from her older brother by a passing Grey Serpent, who took her to the World Serpent to become a mercenary. Her appearance drastically changes throughout the years, eventually becoming "Raven".

After the 3rd Honkai Eruption of 2014, she then created the Roost, consisting of numerous homeless children with incomplete stigmata marks, teaching the children to survive in the ruins of Nagazora, eventually becoming their "sensei" which he she took care of them, aiding them with supplies and medicine. Two of the notable children include Sora and Lyle Collodi.

Years later, she worked alongside Jackal, Owl, the Grey Serpents, and her superior Kevin Kaslana to capture the Herrscher cores to take their power, overthrow the world's equilibrium and build a new one. Natasha was given the task of finding Kiana Kaslana and kill her to take the Herrscher of the Void's core, but could not fulfill her task due to the intervention of the Raiden Mei, who was also looking for Kiana.

Later, when Kevin convinces Mei to betray Kiana by becoming the Herrscher of the Thunder and joining the World Serpent, Raven is amazed at her new partner. 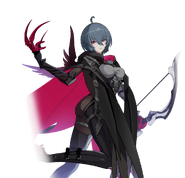