Member of the Teen Titans (formerly)

Member of the One Earth Regime

Rachel Roth, also known as Raven, is a twisted alternate version of the heroic main-universe Raven and a supporting antagonist in the 2013 DC fighting video game, Injustice: Gods Among Us.

She is one of many superheroes who have joined Superman's Regime, as a consequence succumbing to the demonic influence of her father. As a result, Raven is secretly loyal to her father and not Superman, noting that Superman's totalitarian rule will hasten the return of her father.

Rachel Roth is the daughter of the witch Arella, and the notorious demon Trigon. The latter specifically went to various women in an attempt to raise his own children for a conquest on Earth and the mystical realm Azarath. Rachel then rebelled and fled to Earth, where she'd be known as the magic user Raven, then being enlisted for the modern iteration of the Teen Titans. Trigon would become her greatest nemesis, tailing her and tempting her to fulfill his demented wishes.

Raven answers Wonder Woman's call for heroes at the Watchtower. She and Nightwing exchange glances when Wonder Woman makes a speech about how no one was untouched by the tragedy of Metropolis and that there are heroes who no longer stand with them. Raven appears when Mirror Master attempts to escape into his mirror dimension. She forces him out, her face demonically contorted as she pushes Mirror Master halfway out, allowing him to be interrogated by the Flash and Wonder Woman.

Raven is seen intervening in a war between two nomadic tribes in Sudan. She summons the image of her father Trigon to end the conflict by terrifying them into surrender. Raven is among the gathered Justice League as Luthor presents the finished enhancement pill.

Raven, along with several other members of the Justice League, appears before the United Nations as Superman announces his intentions to hunt down Batman before unveiling his new army.

Though she does not appear physically, Zatanna mentions in that Superman is having Raven scour several magical dimensions in his hunt for Batman.

Constantine captured Raven at some point and trapped in her a mystical seal inside a church in Gotham. Constantine later shows both Batman and Detective Chimp her location, with Constantine's reasons being in case something were to happen to him. Raven tries to threaten Constantine by saying, "When my father comes--" but the mage simply retorts that her father will come when he calls.

Raven is still bound in Gotham City when she spots a cat nearby. Though momentarily surprised, Raven calls the cat over, causing it to accidentally knock over one of the candles that line the seal binding her. Triumphant, Raven projects her astral form and escapes.

Seeking Superman out, Raven finds him alongside the Spectre in the upper atmosphere. Though Raven tries to approach the Man of Steel, the Spectre mistakes her reasons and unleashes a stream of emerald light on her, harming Raven's astral form. Superman stops the Spectre and a weary Raven manages to tell Superman of her captors, Batman and Constantine, before quickly realizing her window is closing and the seal is being repaired.

Before she is pulled back to her binding place, Raven manages to show Superman where she is bound before being pulled back, desperately crying out to Superman to save her.

When Cyborg sends out a distress signal for assistance in the battle between Superman's Regime and the gods, Raven is one of the very few who does not answer the call. She claims that she still has much to think about before she can return.

With the assistance of Phantasm, Superman is able to locate Raven and persuades her to return to Earth. Raven returns just as Batman is about to expose a devastating secret about Superman to the world. She is able to use here magic to black out all media devices.

Later Raven, along with Cyborg, capture Deathstroke as he tries to steal a Mother Box from S.T.A.R. Labs for Insurgency Batman.

Raven first appears torturing a captured Deathstroke alongside Cyborg, only to be defeated by Green Lantern, who Raven quickly realizes is not their Hal Jordan. Regime Raven is not seen again until the battle at Stryker's Island, where she takes control of Green Arrow's body and forces him to attack Insurgency Batman.

The Dark Knight defeats Green Arrow, freeing him from Raven's control. Raven is then knocked out from behind by regular Batman. Afterwards Regime Raven shows up on Themiscyria upon finding out Ares had been helping the Insurgency behind the shadow and confront Wonder Woman, who is able to deduce Raven's true loyalty to Trigon based on her new appearance. Raven however, insists that she serves both, pointing out how Superman's rule will hasten her father's return.

Raven then attacks Wonder Woman but is defeated. Her ultimate fate is unknown, but it can be assumed that she was either imprisoned or perhaps claimed by her father.

In her character ending, she defeated Superman, but in battle, she released Trigon. Trigon thanks her as he begins his rampage. 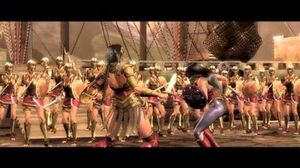 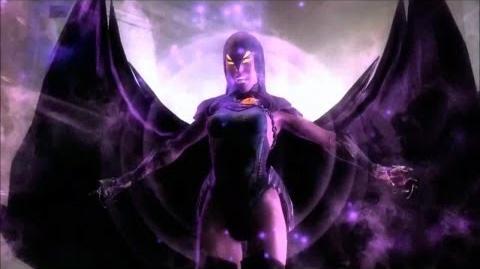 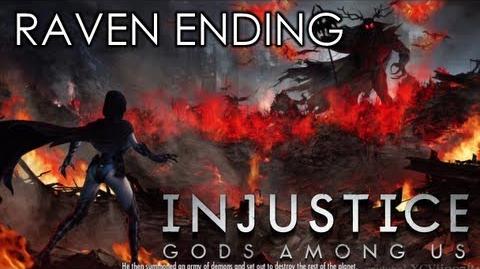 Retrieved from "https://villains.fandom.com/wiki/Raven_(Injustice)?oldid=4359820"
Community content is available under CC-BY-SA unless otherwise noted.