Raven Shaddock is the main antagonist in the 1984 action-drama film Streets of Fire.

Raven Shaddock is the leader of a biker gang called "The Bombers", who run a disctrict in the bad part of Chicago known as "The Battery". Raven and the Bombers run a bar called Torchy's and there are bands that perform there.

Raven, along with the Bombers go into the other part of Chicago called the Richmond and they end up kidnapping a singer name Ellen Aim, who is having a concert at the auditorium and she is taken to Torchy's and being held there. Ellen Aim's ex-boyfriend, Tom Cody, along with Ellen's manager and new boyfriend, Billy Fish, and a former soldier, McCoy go to rescue her.

Tom Cody rescues Ellen and McCoy and Billy Fish drive off in Cody's car. Cody shoots up some of the Bombers' motorcycles and and Raven walks through the fire and he and Tom Cody meet. Raven tells Cody that likes it when someone likes to play rough and tells Cody he will be coming after him and Ellen. Cody rides off in one of the Bombers' motorcycles and meets up with Ellen Aim, McCoy, and Billy Fish.

A few days later, Raven has a talk with Officer Cooley and Officer Price, he tells them he and Cody will fight it out on the street and he will not send any of his men there. The next day, Raven waits for Cody and Officer Price tells Raven to leave, but does not and calls in the rest of the Bombers with an airhorn. Cody shows up and both Raven and Tom end up fighting it out, first with spike hammers and then they fight with their own fists. Tom Cody ends up defeating Raven Shaddock and is badly beaten. The cops, along with the citizens of Richmond pull out guns and point them at the Bombers. Raven is taken away by his second-in-command Greer and the Bombers leave the Richmond. 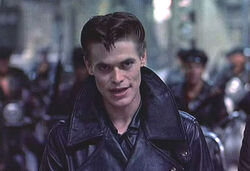 Raven Shaddock, along with the Bombers wait for Tom Cody.

Raven Shaddock is defeated in a fight with Tom Cody.
Add a photo to this gallery
Retrieved from "https://villains.fandom.com/wiki/Raven_Shaddock?oldid=4150208"
Community content is available under CC-BY-SA unless otherwise noted.