Destroying any city in their path.

Kill all of humanity.

The Ravenii are the primary antagonists of the 2018 action-fantasy videogame Extinction. They are a race of unimaginably violent ogres who seek the extinction of the human race.

The Ravenii are monstrous humanoids of great size who have began a crusade against human life, leading a massive horde of much smaller monsters the Ravenii take to marching across the land, destroying every city in their wake and killing any humans their horde fails to massacre.

With their untold physical might the Ravenii would succeed in wiping out the human race, if not for a single warrior carrying a rune-sword, who steps forth to oppose them and ultimately slays all the prominent Ravenii commanders, stopping their plans for global genocide.

Ravenii are giant humanoids akin to orcs, ogres and trolls - they tend to be green in coloration but red and blue variants also exist, they seem to be much larger variants of the smaller hordes of monsters they have command over : larger and presumably more important Ravenii also take to wearing helms and shackles across their arms and legs, defending their only weak-points.

All Ravenii are colossal giants that tower over entire buildings, capable of destroying said buildings with a single stride and having immense strength, even for their size - the larger Ravenii also often fashion armor for themselves to protect their heads, arms and legs : while they can be harmed by rune-weapons they will regenerate lost limbs, the only way to truly kill them is to fully decapitate them.

Ravenii are simplistic monsters and thus have very little personality, as a whole they tend to be rampaging brutes who have a near-mindless desire to destroy everything in their path - despite this they must have some basic degree of leadership as they command large armies of much smaller monsters, who they send out as scouts to mass-murder even more humans, who they seem intent on wiping out.

Lacking any speech the Ravenii appear to be the classical ogre of myth, monstrous beings that are as much forces of malignant nature as they are genocidal monsters. 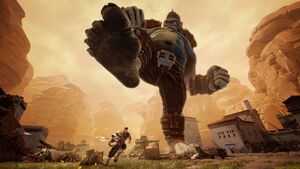 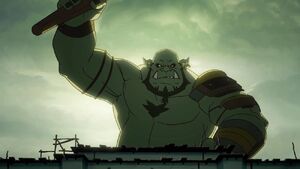 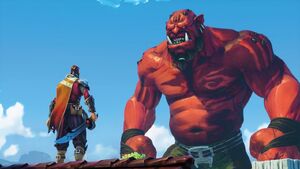 Retrieved from "https://villains.fandom.com/wiki/Ravenii?oldid=3303667"
Community content is available under CC-BY-SA unless otherwise noted.