Destroy Zeal and its inhabitants

Rawhead Rex is the titular monster from the short story of the same name by the horror author Clive Barker, and its 1986 fantasy horror film adaptation of the same name. The original short story was published in the third volume of the Books Of Blood series.

In the 1986 film, he was portrayed by Heinrich von Schellendorf.

Rawhead Rex was an ancient, malevolent, carnivorous, and bloodthirsty beast and the living embodiment of the male sex drive who terrorized the English town, Zeal, in which he resided in. Rawhead was known for devouring children, and violating and impregnating women, with his only fear being that of pregnant women or women on their periods. Rawhead was eventually defeated when the townsfolk buried him alive, where he remained for centuries.

Centuries later, Rawhead was freed from his imprisonment by a hapless farmer, who Rawhead immediately murdered by shoving him down the hole he was imprisoned in. Seeking to regain his power, Rawhead went on a killing spree, first targeting a farm, murdering the family present there. Rawhead then attacked a police officer, castrating him with his claw. After discovering gasoline and learning how to light it aflame, Rawhead set the helpless officer on fire, killing him.

Arriving at the local church, Rawhead corrupted the local Verger, who aids him in murdering the Vicar, Coot. Rawhead continues his killing spree, devouring a child in front of his father, Ron. It is then discovered that Rawhead's weakness is that of a female symbol of a pregnant woman, Rawhead's antithesis and his one fear. When Ron uncovers the idol, Rawhead, fearful of being defeated, sets the town alight to murder the townsfolk, killing the Verger as well. In spite of Rawhead's efforts, he is overwhelmed when Ron uses the symbol to stall him, weakening him and allowing the townsfolk to mob him, beating him until Ron uses the idol to smash Rawhead's skull, thus killing him.

British director George Pavlou directed a film based loosely off the novel in 1986 called Rawhead Rex. In the film, Rawhead's design is vastly different; as well as him being the incarnation of man's sexual urges. The monster is believed to actually have been worshipped as some kind of god in the time of B.C. 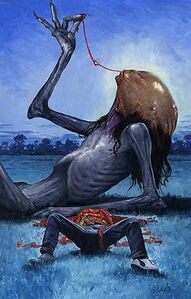 Rawhead devouring one of his victims. 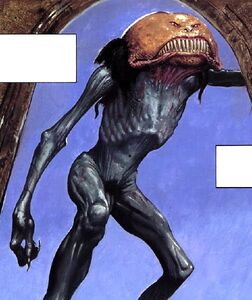 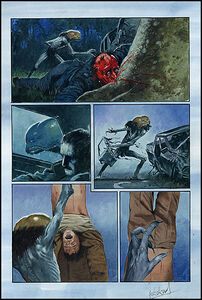 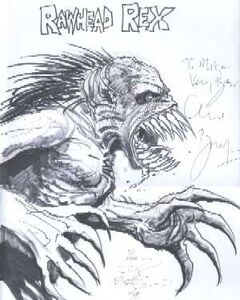 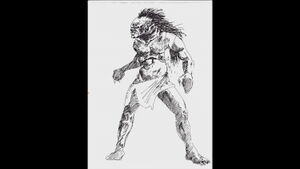 A sketch of Rawhead by Paul Catling. 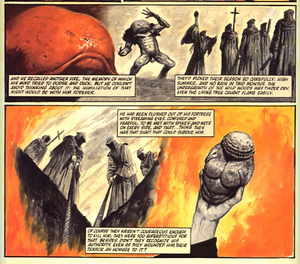 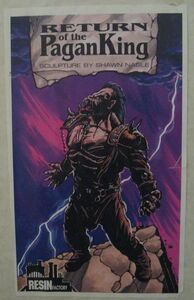 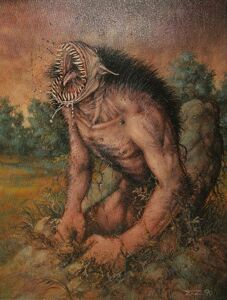 A sketch of Rawhead by Michael Zulli. 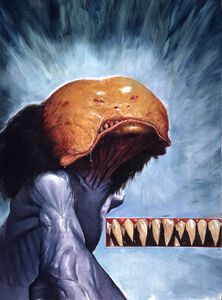 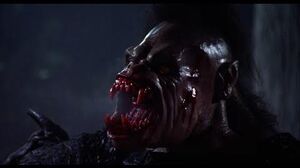 Rawhead Rex Best Trailer
Add a photo to this gallery

Retrieved from "https://villains.fandom.com/wiki/Rawhead_Rex?oldid=3343943"
Community content is available under CC-BY-SA unless otherwise noted.