Rawk Hawk is an antagonist in Paper Mario: The Thousand-Year Door who serves as the penultimate boss and the central antagonist of Chapter 3.

Rawk Hawk used to be an arrogant brute who just wanted to win and keep his position as champion even if he had to cheat and hurt others to achieve it. After the defeat of Macho Grubba, he became less hostile to the other fighters, and conversely, more honorable and upstanding, vowing to fight fairly from then on so he could truly earn the championship, although he was still fairly arrogant.

Rawk Hawk is a wrestler in the Glitz Pit who is the supposed champion. He is adored by many people and because of this, he has a real attitude problem. He's a villain because he tried to poison Mario when he was quickly climbing the ranks and starting to threaten his title. And when that didn't work, he tried to make it look like Mario, or the "Great Gonzales" as Grubba preferred to call him, had run away from their fight by tipping off someone to lock them in their room. However, Mario and his party manage to find a way out and reach the ring before they can be disqualified from the match, finally battle Rawk Hawk and teach him a lesson in the process. However, even though Rawk Hawk was defeated and Mario was the new champion, they still had to found the Crystal Star, which was in Grubba's hands all along. Rawk Hawk is seen again when Bowser and Kammy Koopa are looking for the Crystal Stars. He gets angered because of Bowser and Kammy Koopa invading his room and quickly challenges Bowser to a fight, but he gets defeated easily almost instantly. He is last seen during the final fight against the Shadow Queen giving his blessing to Mario along with all the people in Glitzville.

In Super Smash Bros. Brawl, Rawk Hawk appears as a sticker that increases Mario, Luigi, Yoshi, Peach and Bowser's arm attacks. Rawk Hawk is also one of the random names chosen for a custom stage. 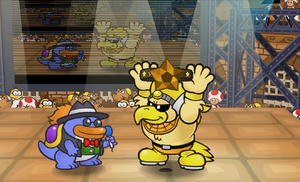 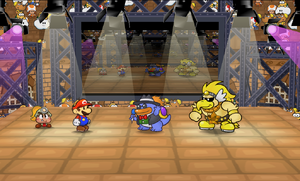 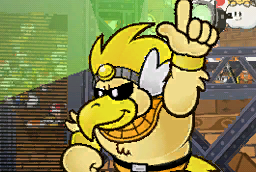 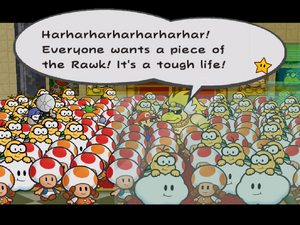 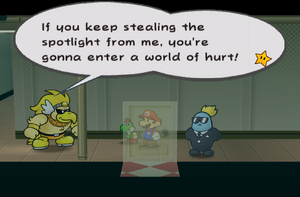 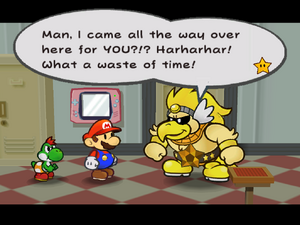 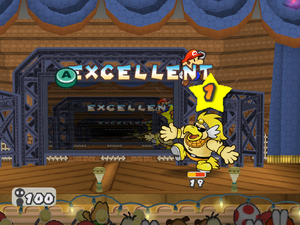 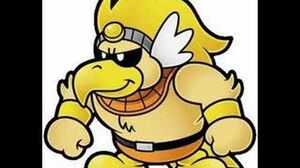 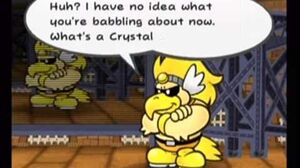