Become a woman.
Trick everyone on the police in order to obtain a rank of lieutenant.
Kill Roger Podacter in order to prevent him from knowing about Snowflake (both succeeded).
Kill Ace Ventura and to avenge his loss at Super Bowl XVII by killing Dan Marino and the mascot for the Miami Dolphins (failed).

He was the former popular kicker for the Miami Dolphins group, but was ultimately dismissed for costing the team a Super Bowl win. Finkle went completely insane, escaped from Shady Acres mental hospital, and had a sex reassignment surgery to escape the authorities. Afterward, he then worked as a corrupt senior Miami-Dade Police lieutenant under the disguise and name of a missing female hiker named Lois Einhorn.

He was portrayed by Sean Young.

Ray Finkle hailed from Collier County, Florida. He graduated from Collier High June 1976, and attended Stetson University, where he was an honors graduate from the Class of 1980. He became a football kicker nicknamed "The Mule," holding two NCAA division one records, for most points in a season and distance. Halfway through the 1982 NFL season, Finkle joined his home state's NFL team, the Miami Dolphins.

The team, led by star quarterback Dan Marino and with Finkle having a great performance, went all the way to the Super Bowl against the San Francisco 49ers. In the final play, the Dolphins had a field goal, which if Finkle converted would give them the title. He missed on wide right though, and Miami lost. During the kick, Marino held the ball after it was snapped; in the aftermath of Super Bowl XVII, Finkle blamed Marino for the miss, claiming he held the ball "laces-in" when he should have held it "laces-out." But this was dismissed as the ravings of a sore loser. Coaches and team owners alike took the loss very hard. After the season, Finkle's contract was not renewed and his reputation was destroyed; as a result, no other team would take him on, seemingly believing that he would repeat this blunder when it mattered most, effectively causing his NFL career to wash out.

Finkle went back to his hometown, working at a bar and being violently assaulted by gangs of men who had bet their entire life savings on the game. Even his attempts to live in his old house were subject to constant bombardment by those still furious over the outcome of the game. Dealing with the constant anger and resentment (both his own and of others) over the Super Bowl loss, the subsequent ruin of his career, and living through constant the vandalism of his house, further assaults, and presumably even drive-by shootings (given the bullet holes in the house) as well as the constant humiliation from the public and media -- all of which his parents suffered through, as well -- Finkle eventually snapped, turning his bedroom into a shrine declaring his hatred of Dan Marino, and was eventually put into a mental institution in Tampa called Shady Acres.

While committed in 1984, Finkle found out about a hiker named Lois Einhorn who went missing, and her body was never recovered. The next day, he escaped from Shady Acres, planning on taking over Einhorn's identity. His last credit card record was in June, where he rented a car from Avis, which was found abandoned two months later in South Miami. Finkle then got a feminine body, with breast implants and such over the next few years, though he kept his male genitalia intact. In 1987, "Einhorn" joined the Miami-Dade Police Department. By way of seduction and sexual manipulation, "she" climbed all the way up to a Lieutenant rank in just a matter of years.

In 1994, with the Dolphins poised for another Super Bowl appearance, Finkle decided to put his plan against Marino into motion. While on a date with Dolphins Head of Operations Roger Podacter, "Einhorn" got the key to Joe Robbie Stadium, and, with the help of his cronies named Vinnie and Roc, kidnapped Dolphins mascot Snowflake from its tank. During the ordeal, Snowflake hit Finkle's hand with its tail, making him lose a rock off his 1984 AFC Championship Ring.

The following day, Ace Ventura, a "pet detective" hired by the Dolphins to find out about Snowflake's whereabouts, found the rock, and came to theorize about its championship ring origins. Ace tried to find out whose ring is missing a stone by tricking players into showing their rings until his list of suspects was used up.

The same day, as Ace moped around Dolphins publicist Melissa regarding his failed chase, Einhorn went back into Podacter's apartment for another secret rendezvous, and eventually seduced him. However, during this time, Podactor discovered that Finkle/Einhorn still had male genitalia. In response, Einhorn attacked Podactor, and after a brief struggle, threw him off the balcony, making it seem like a suicide. When Ace went to the crime scene with Melissa, he proved it was a murder, much to Einhorn's chagrin. Afterwards, Melissa took Ace to the Dolphins HQ, where he found out about Finkle. After visiting the Finkle home, he called Melissa to warn her about that Marino is in danger, but Marino was kidnapped before he could be alerted. Ace gave chase to the kidnappers, but was unable to keep up.

Ace met with Lt. Einhorn and alleged that Podactor's murder and Marino and Snowflake's kidnappings were all connected and that Finkle was involved. He explains his beliefs of Finkle's motives: his hatred for Marino for messing up the hold on the missed kick that ruined his career and life, that he killed Podactor after the latter caught him snooping in his apartment and recognized him, and that the Dolphins gave Snowflake Finkle's old jersey number and taught him how to kick a field goal, which Finkle took as a personal insult (due to his aforementioned failed field goal that resulted in the Super Bowl loss), noting that Finkle has waited for years until the next time the Dolphins return to the Super Bowl to extract his vengeance on the franchise. Einhorn then unexpectedly came onto Ace. The two shared a kiss (during which Ace felt something that he assumes to be Einhorn's gun digging into his hip) and Einhorn told him s/he would now handle the rest of the investigation. Ace, still not satisfied with Einhorn's efforts to find Marino and Snowflake, pretended to be mentally challenged so he and Melissa could gain access to Shady Acres.

Ace proceeded to wear a pink tutu along with messing up his hair. After Ace found the newspaper regarding the hiker Einhorn in Finkle's possessions, Ace revealed it to his policeman friend Emilio, and went back to his apartment and tried to figure out a connection between the two. Once Einhorn left the police station, Emilio looked through Einhorn's desk and found a love note from Podacter. This eventually led Ace to the realization that "Einhorn" not only killed Podacter, but Einhorn is Finkle in transgender disguise. Ace's sense of triumph was quickly replaced with disgust after realizing that he had unknowingly kissed someone he now perceives as a man, and that the "gun" he felt digging into his hip earlier was actually Finkle's privates.

When Super Bowl Sunday arrived, Ace follows Lt. Einhorn to a remote warehouse by the docks where both Marino and Snowflake were being tortured and the two engage in a short struggle before all of the Miami Police force arrived to arrest Ace on Lt. Einhorn's orders. They are stopped by Melissa, who has Emilio held hostage at gunpoint. Lt. Einhorn yelled at the police officers that Ace is behind everything and that he kidnapped Snowflake and was trying to kill Marino and "her". Ace explained Lt. Einhorn's motives and claims that she is actually Ray Finkle. Lt. Einhorn denied all of Ace's accusations, which leads to Ace trying to find proof of his accusations by first trying to remove the lieutenant's hair thinking it to be a wig - it turned out to be "her" real hair.

Next, Ace ripped open Einhorn's blouse to find two perfect feminine breasts. In a last ditch effort, Ace ripped off her skirt in order to expose her lower private parts, but instead it appeared she had the normal figure of an attractive woman. Just as Ace is about to give up on his theory, Marino alerts Ace of a large bulge that he could see behind in Lt. Einhorn's silk panties. Now with concrete proof against Einhorn, Ace made a short, humiliating speech directed at Einhorn and spun her around violently to reveal Finkle's private parts that had been hidden from view to the whole Miami police force, revealing that Finkle had actually killed Podacter because "he found Captain Winky!" while on a date with him/her.

Every male officers on the whole Miami police force, Marino and even Snowflake reacts by spitting comically in total disgust at this revelation of Lois Einhorn's true identity as Ray Finkle, suggesting Finkle had seduced all of them as he did with Ace (there is even one female officer who reacts similarly, hinting that Finkle had likely done the same with her, despite their "shared" gender). Having his plans exposed, an embarrassed and enraged Finkle made one last attempt to kill Ace with a shard of glass, but the latter flipped him over the wharf into the water. Finkle came up spitting out water in ruin and total defeat. Ace then found the ring with the missing stone on his hand to finalize his theory that "Lois Einhorn" was no doubt the disgraced Ray Finkle the whole time.

Finkle was arrested and sent to prison for all of his crimes. 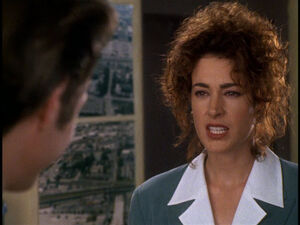 Finkle, disguised as Einhorn, telling Ace to stay out of the Snowflake case. 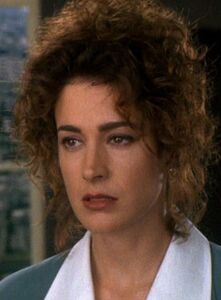 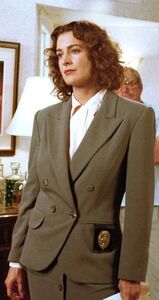 Finkle as Einhorn in Podacter's apartment. 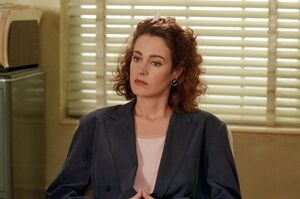 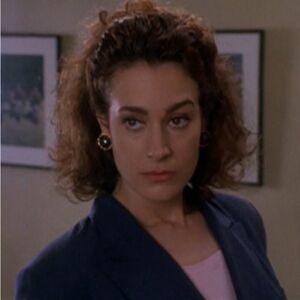 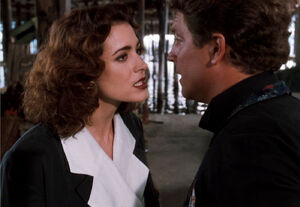 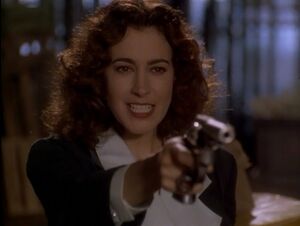 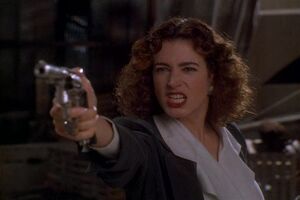 "What would you know about pressure?" 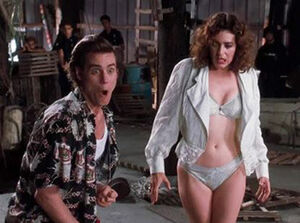 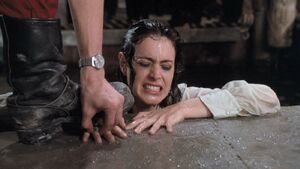 Finkle humiliated by Ace and then arrested for his crimes.