Colonel in the U.S. Military

Kill Frank Castle an soldiers who are aware of his war crimes in Kandahar (failed).

Ray Schoonover is a recurring antagonist in the Marvel Cinematic Universe, serving as the secondary antagonist of Daredevil's second season, and later as a posthumous antagonist in The Punisher. He was a colonel in the U.S. Military who also is secretly a notorious drug lord known as Blacksmith. Ray was the C.O. of Frank Castle, as his actions directly resulted in the events which would destroy his former charge.

He was portrayed by Clancy Brown, who also portrayed Mr. Krabs from SpongeBob SquarePants, Byron Hadley from The Shawshank Redemption and voiced Surtur in Thor: Ragnarok.

During the War on Terror, Schoonover served in the United States Armed Forces and was the Commanding Officer of Frank Castle, whom he deeply respected for his determination and loyalty in the battlefield.

During an operation which went wrong, he lost one of his hands, after which Castle took command. Single-handedly he managed to clear their helicopter's landing zone of enemy fighters. Sometime later, one of Schoonover's most loyal Marines, Gosnell, was nearly killed by an explosion, damaging much of his face. Eventually Schoonover and most of his servicemen returned to the United States of America.

Schoonover became a drug lord called the Blacksmith, plotting to take over the entire drug trade within New York City, developing a rivalry with Madame Gao's own heroin trade. Using his position, Schoonover arranged for drugs to be smuggled into the country covertly.

The D.A.'s office arranged a sting operation to uncover the Blacksmith's identity at a meeting in Central Park between the Kitchen Irish, Mexican Cartel and the Dogs of Hell. Schoonover did not show up to the meeting, resulting in the gangs getting rattled and opening fire on each other. An undercover cop and Frank Castle's family were incidentally killed in the crossfire.

When Karen Page went to Schoonover's home to interview him about Frank Castle, she soon realized that he was The Blacksmith when she saw a framed picture of one of his goons names Gosnell on his desk, who she previously saw dead at a crime scene where Frank killed him and many other men in an explosion.

Ray then pulls a gun on Karen and orders her into her car and makes her drive into the woods. Out of nowhere, Frank t-bones Karen's car on Ray's side so she isn't harmed. He then drags him into a nearby shack in the woods and after shooting him in the head, he finds and steals Ray's secret stash of military grade weapons. 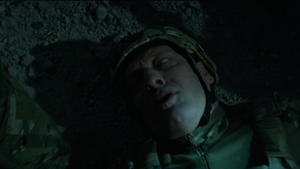 Ray during the ambush in Kandahar, Afghanistan where he loses an arm in an explosion. 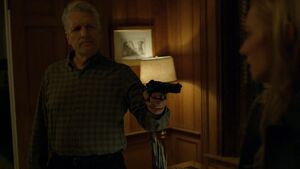 Ray holds Karen at gunpoint after she discovers that he is The Blacksmith.

The Punisher executes The Blacksmith.