Ray Sinclair is the main antagonist in the 1986 film Something Wild.

He was portrayed by Ray Liotta, who also played Pete Davis in the 1992 film Unlawful Entry, Ryan Weaver in the 1997 film Turbulence, and Gallian in the 2007 film In the Name of the King: A Dungeon Siege Tale.

Ray Sinclair is the estranged ex-husband of heroine Audrey Hankel. He first shows up at Audrey's high school reunion dancing with his date Irene. He first seems to be a decent guy and takes a liking to Audrey's friend Charlie Driggs. As all three head over to a convenience store, Ray's true colors start to show up as he robs the store much to Charlie's shock. They end up in a motel room and under duress, Audrey reluctant decides to stay with Ray. Ray reluctantly tells Charlie to leave, warning him to keep away from Audrey, but Charlie secretly tails them when they leave the motel.

After Charlie frees Audrey from Ray's grasp, taking her to his house, Ray unexpectedly shows up and he and Charlie get into a massive scuffle. After Audrey attacks Ray with an object in order to stop him from killing Charlie with a knife, Charlie eventually picks up Ray and accidentally stabs him in the chest, causing him to walk outside the bathroom and eventually collapses on the floor, killing Ray instantly. 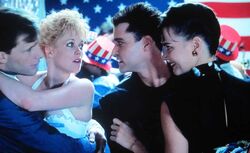 Charley, Audrey, run into ray Sinclair at the dance.

Ray Sinclair at a motel with Audrey and Charley.

Ray being bluffed by Charley.

Charley strangling Ray with the handcuffs.
Add a photo to this gallery
Retrieved from "https://villains.fandom.com/wiki/Ray_Sinclair?oldid=3898099"
Community content is available under CC-BY-SA unless otherwise noted.