Unofficial mascot and sidekick of the Justice Guild of America

Wishing to be a member of the Justice Guild of America.

Fighting crime.
Preventing anyone from discovering the truth about his psychokinetic powers and the deaths of the real Justice Guild.

Relive the days of the Justice Guild forever.

Raymond "Ray" Thompson is the hidden, main antagonist of the 2-part Justice League episode "Legends". He was the mascot of the Justice Guild of America who, in reality, was a mutated human being possessing supernatural powers and psychokinetic abilities.

He was voiced by Neil Patrick Harris, who also played Foy in A Million Ways To Die in the West, Chester Creb in American Horror Story: Freak Show, Dr. Horrible in Dr. Horrible's Sing-a-Long Blog, Dr. Blowhole in The Penguins of Madagascar, John Tagman in Law & Order: Criminal Intent, Music Meister in Batman: The Brave and the Bold, and Count Olaf in Netflix's adaptation of Lemony Snicket's A Series of Unfortunate Events.

The original JGA fought in a nuclear war that cost all of their lives and lead to the destruction of most of their own planet. Ray survived and developed vast psychic powers from the nuclear fallout. He used his newfound powers unlike his fellow survivors to recreate the world in which he lived and "resurrect" his heroes as well as their villainous enemies the Injustice Gang as virtual reality constructs.

When a part of the Justice League which are only Flash, Green Lantern, Hawkgirl and Martian Manhunter entered the timestream of the alternate Earth, they worked alongside the JGA to defeat schemes planned by the villainous Injustice Guild. Hawkgirl, while ending a battle of this manner, stumbled upon the graves of the "real" JGA, becoming suspicious as to what was really going on. After a series of events, an enraged Ray revealed his true form and his plot (which was simply to recreate the world he once knew and the heroes he worshipped as a child). The JGA learned that they were simply Ray's "creations", and not the true heroes, so in a true act of nobility, they did battle with Ray and "died" once again to save their world, however real it may have been, which in turn, defeated the misguided Ray, but also freed the surviving former inhabitants of the alternate Earth from their 40 year-old fabricated nightmare and given them back their future.

Since his mutation, Ray Thompson possesses tremendous psychic abilities beyond his imaginations.

His mental abilities can be strained to the point of incapacitating him, as the recreated Justice Guild found out. 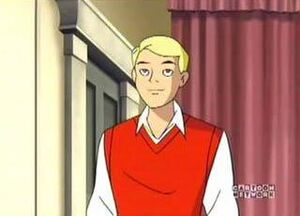 Ray Thompson in his human form. 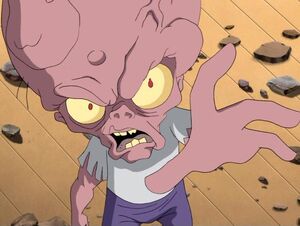 Ray Thompson in his mutant form.