Founder and mayor of San Angeles

Founder and CEO of Cocteau Industries

Being beloved by his own people.

Drive Simon Phoenix into killing Edgar Friendly and his survivors group in order to ensure his existence as San Angeles's mayor and with no disturbance (failed).

Raymond Cocteau is the secondary antagonist in the 1993 live action film Demolition Man.

He was portrayed by the late Nigel Hawthorne, who also played Dr. Boycott in The Plague Dogs and Campion in Watership Down.

Years after Sgt. John Spartan and Simon Phoenix are frozen, Dr. Cocteau (who is one of the same people who built the CryoPrison) creates what he believes to be the perfect society where crime is a virtually non-existent, and paternalistic society that forbids anything deemed unhealthy, including fatty foods and sexual intercourse. Even cursing is illegal: in one of the film's running gags, characters (typically Spartan) incur a fine each time he or she swears. Also tobacco products and alcohol are illegal. All part of his personal dream he then calls the "Cocteau Plan". With this plan, he's able to began what became San Angeles, a clean and pacific version of what used to be the city of L.A. in California as well.

Spartan and Huxley face Phoenix at a museum, as both officer and criminal realized that would be the only place in the pacified society where lethal weapons still exist. As Phoenix escapes, he encounters Dr. Cocteau and threatens to kill him, but finds that he is physically unable to do so. Dr. Cocteau suggests that Phoenix kill Edgar Friendly, the leader of a resistance force called the Scraps that refuses to accept Cocteau's society, and agrees to release other prisoners from CryoPrison to help him. Spartan and Huxley check Phoenix's rehabilitation program and find that he had been "rehabilitated" with training in a number of violent skills and access codes (while Spartan was rehabilitated as a seamstress).

Huxley procures a video from a museum security camera which captured Phoenix's encounter with Dr. Cocteau, and though the audio is undecipherable, Spartan is suspicious when he sees that Phoenix had plenty of time to kill Cocteau. Upon confronting Cocteau, an arrest warrant is placed on Spartan. Despite this, Spartan is able to convince Huxley to help him hunt for Phoenix in the subterranean passages where Edgar Friendly's resistance force lives.

When Spartan encounters the resistance force, he learns they are refugees who have refused to give up their way of life as required by Dr. Cocteau's utopia and have been forced to live in the wastelands of old Los Angeles. Spartan deduces that during his CryoPrison stay Phoenix was given a mental block that prevents him from killing Dr. Cocteau and fed the suggestion to kill Friendly. This would eliminate the last resistance to the Cocteau regime, something that the pacifist San Angeles Police Department is incapable of doing. Phoenix and his gang attempt to kill both Spartan and Friendly, but Friendly has retained his combat skills, and the two of them and Huxley drive them off. Edgar Friendly and the armed Scraps have presumably defeated two of Simon Phoenix’s minions.

Phoenix returns to Dr. Cocteau with the remaining members of his gang, presumably to lie about stopping Friendly, and unable to harm Cocteau himself due to his rehabilitation, orders his men to kill him instead as Phoenix now saw the foolish pacifist as an evil Mr. Rogers. Cocteau is then shot to death and his corpse is thrown on the fire. Phoenix then sends his goons after Lenina Huxley and John Spartan. After Lenina Huxley knocks out a gang member of Simon Phoenix she kills another.

After defeating more of Phoenix's men, they make their way into Cocteau's office and discover his corpse on the fire with Spartan remarking: "Looks like the Cocteau plan just went up in smoke!" This is when they have a stand off as two more of the henchmen appear to vanish out of the picture with Lenina Huxley holding the stun baton like a machete following John Spartan's lead into the office with aiming the gun. 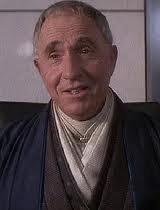 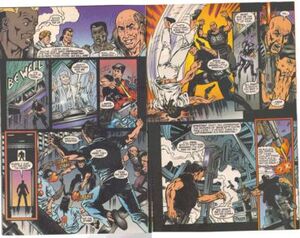 This is a scan from the comic book adaption when John Spartan fights new recruits to Simon Phoenix's criminal gang and fights the same person who did the work for Simon Phoenix in killing Dr. Raymond Cocteau.
Add a photo to this gallery

Retrieved from "https://villains.fandom.com/wiki/Raymond_Cocteau?oldid=3477263"
Community content is available under CC-BY-SA unless otherwise noted.